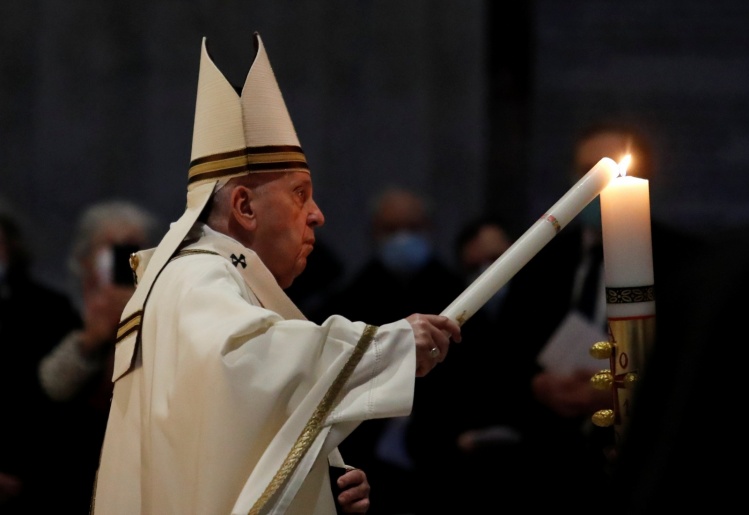 Earlier this month, the New York Times devoted the entire Letters to the Editor section of its “Sunday Review” to current controversies in the Catholic Church (“Where Does the Catholic Church Go From Here?”). The letters were all written in response to two columns, one by the Times’s conservative Catholic columnist Ross Douthat (“The Ungovernable Catholic Church”) and the other by Matthew Walther (“This is Why America Needs Catholicism”). Walther is the editor of the Lamp, a new Catholic bimonthly journal, and a contributing editor at the American Conservative.

Douthat’s column argued that Pope Francis’s recent effort to curtail the celebration of the traditional Latin Mass was likely to fail given the Church’s internal divisions and loss of authority. “More than any other point in my lifetime, neither past analogies nor present trends supply much clarity about the church’s future,” he wrote. “Whether you are theologically left or right, it’s disruption all the way down.”

Walther’s argument about the pertinence of the Church’s moral and social teachings to the politics of twenty-first-century America was more idiosyncratic and idealistic. The nation’s current polarization, Walther argues, does not reflect the beliefs or values of most Americans, who are socially conservative but reject the winner-take-all modern economy. Americans reject the libertarianism of both the cultural Left and the corporate Right, and so does the Catholic Church. “The church presents a refreshing response to our nation’s enforced ideological bifurcation,” Walther writes. “A new Catholic politics would ‘baptize’ Bernie Sanders’s health-care plan, degrowth economics, and bans on single-use plastic while drawing attention to neglected elements of our own political heritage that really are worth preserving, such as the presumption of innocence.”

As you might imagine, the suggestion that “America Needs Catholicism” was not received enthusiastically by letter writers to the Times. One correspondent asked where the Church had been in the 1920s and 1930s during the advent of European fascism. A fair question, to be sure, but one that ignores how the Church became an outspoken and influential force for democratization and human rights after the Second Vatican Council. Another writer was “truly appalled” by Walther’s proposal that America would benefit from a version of post–World War II European Christian Democracy. He was sure such a political outcome would threaten the freedom of nonreligious citizens, although there is little evidence that Christian Democracy ever threatened the freedom of nonreligious Europeans. Quite the contrary: secularization has triumphed in Europe, including in those countries where Christian Democratic parties have been the most successful. Still another letter writer complained that the Catholic Church denies decision-making authority to women, that it continues to condemn abortion and divorce, and that its creeds and doctrines are nothing more than “magical thinking.” So far from being relevant, the Church is, from this point of view, beyond redemption.

It is increasingly the conviction of many Catholics and non-Catholics alike that the Church is a seriously and perhaps irredeemably flawed institution.
sharetweet

As for critics of Douthat’s column, they were impatient with his uncertainties about the Church’s future. He needs to “read the room,” wrote one. “Like it or not, the young people will ultimately lead.” Christ “broke all the rules,” and so—when it comes to the Church’s traditional teachings and organization—should Pope Francis. The answer to the Church’s problems is to “truly modernize.” That perspective was echoed by another letter writer, who praised the pope for “returning the church to a proper imitation of the Jesus of the New Testament Scriptures and to His simple, yet profound message of faith and forgiveness of all.” Somehow, this letter writer lamented, that message “has morphed over time into a deeply flawed institution weaned on formalism, ideological rigidity and careerism.” With the exception of one Latin Mass enthusiast and another writer who was piously confident of the Church’s future, the consensus was that the Church needs to be simplified and modernized. “There should no longer be a privileged class of male-only celibate priesthood,” wrote a former priest. “Such a class is too susceptible to self-deception and hubris.”

Bare ruined choirs indeed. There was, alas, nothing surprising in these letters to the editor. It is increasingly the conviction of many Catholics and non-Catholics alike that the Church is a seriously and perhaps irredeemably flawed institution. The ugly reality of clerical sex abuse understandably influences that judgment. But this critique of the Church’s “message” is much older than the abuse scandals. The Church’s hierarchical structure, teachings on sexual morality, and its supposed “magical thinking” have long placed Catholicism at odds with some elements of modernity and the so-called scientific age. What is usually neglected in these critiques is how the Church’s quarrels with science and democracy have been, for the most part, fruitfully resolved. More theological questions remain unresolved. For example, is Jesus’s “message” really as simple as many now seem to believe? Is it really only about forgiveness? What about Jesus’s “hard sayings” and the seemingly impossible demands he placed on his disciples? “But Jesus looked at them and said to them, ‘With men this is impossible, but with God all things are possible’” (Matthew 19:26). Jesus also claimed to be the Son of God; that proclamation hardly seems simple to me. Has the Church been wrong in its interpretation of the meaning of those words in its Creeds and Trinitarian theology? Jesus’s disciples claimed that he rose from the dead, and that those who believe in him will do so as well. That promise certainly breaks all the rules, but probably not the rules the Times’s letter writer had in mind. Yet that promise—what some would call “magical thinking”—has given the Church its purpose and distinctive character since its improbable founding.

If the Church’s critics, or even its defenders, remain focused on its putative usefulness only in the here and now, they’ve missed the point, as Douthat explained in a subsequent column (“A Guide to Finding Faith”). Our secular, materialistic, and utilitarian assumptions about what is real and what is useful blind us to other possible realities, and leave many unbelievers alienated and mistrustful. Those assumptions are “like a spell that’s been cast over modern minds, and the fastest way to become religious is to break it,” Douthat wrote. Breaking this spell isn’t easy—as the letters to the Times demonstrate. But there is a rich and varied universe of religious experience available, if we are willing to look at the world with that exemplary modern attitude: an open mind.