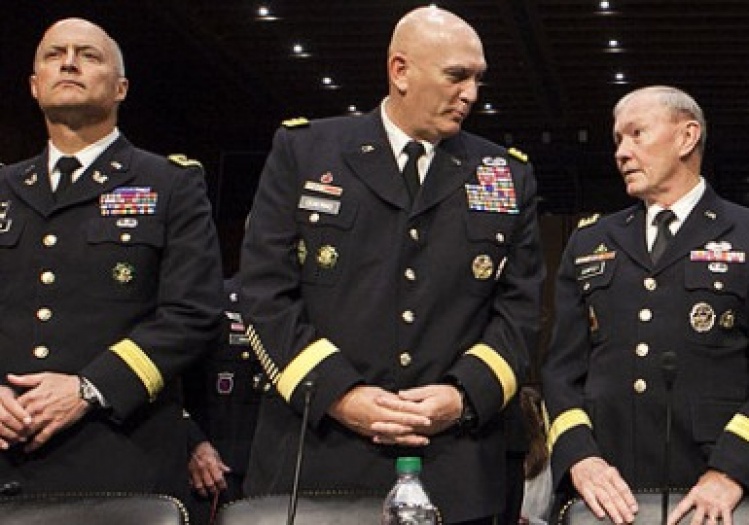 Lieutenant Colonel James Wilkerson, a U.S. fighter pilot, was accused in 2012 of sexually assaulting a civilian woman at his home in Italy, where he was stationed. He was court-martialed, convicted of aggravated sexual assault, and sentenced to one year in jail as well as dismissal from the Air Force. The convening authority, Lieutenant General Craig Franklin, decided the conviction was unwarranted, and because the Uniform Code of Military Justice (UCMJ) allows him to do so, he wiped Wilkerson’s record clean. The conviction disappeared, and Wilkerson remained in the Air Force—until public outcry led to his retirement (and demotion to the rank of major) in October 2013.

The military has a big problem with sexual assault. An estimated twenty-six thousand people in the military were subjected to unwanted sexual contact in 2012, according to sources such as the Center for American Progress. Incidents run from repeated unwelcome remarks or comments—the military does not provide protection against sexual harassment the way civilian employers do—to rape. Enlisted military personnel of both sexes—that is, the lowest-ranking and least powerful service members—are at greatest risk of abuse and exploitation. Until now, the military has handled these cases on a surprisingly ad hoc, subjective, personal level: unit commanders (overwhelmingly male) are given discretion over how and in some cases whether to punish sexual predators.

Not surprisingly, this situation has led to some scandalous instances of favoritism and miscarriages of justice. Heightened advocacy and awareness of cases like Wilkerson’s have led to three legislative initiatives, one in the House and two in the Senate, that would reform how the military approaches cases of sexual assault. A set of reforms championed by Missouri Democratic senator Claire McCaskill proposes that the chain of command retain control over courts-martial in sex-assault cases, but lose the ability to overturn juries’ decisions and discretion over how to punish convicted offenders. Convictions in such cases would now lead to a mandatory dishonorable discharge. Some of McCaskill’s proposed reforms have already passed in the House as an amendment to the National Defense Authorization Act, and are due for a vote in the Senate. The Military Justice Improvement Act, proposed by New York Democrat Kirsten Gillibrand and expected to come up for a vote in the Senate in January, would take the military chain of command out of the picture entirely and place the process in the hands of an independent prosecutor drawn from the ranks of the Judge Advocate Generals (JAGs). The House bill, called the STOP Act, spearheaded by California Democrat Jackie Speier, would have the reporting and prosecution process overseen from start to finish by an independent, joint military-civilian office, which would have to be created for that purpose.

Speier’s proposal in the House goes furthest in taking sexual assault outside military authority, but it may create bureaucracy where none is needed. Although some have criticized Gillibrand’s bill for not going far enough, in my experience, her proposal is correct in its judgment that the JAGs and Inspectors General (who handle complaints and inspections) are sufficiently independent from military chains of command but inadequately invested with authority, especially when it comes to sexual assault and harassment cases. In the case of LTC Wilkerson, for example, the Uniform Code of Military Justice worked up to a point: JAGs were on hand to prosecute and defend him, and he was sentenced for his crimes. Wilkerson’s punishment was vacated by his chain of command. McCaskill’s proposal, which has the support of the Pentagon, places an excessive amount of trust in the military establishment and simply doesn’t go far enough to produce meaningful change. Overall, Gillibrand’s bill is more limited in scope than Speier’s but has more potential to effect real change than McCaskill’s, and a better chance than Speier’s of succeeding.

It’s not difficult to imagine why the military would take exception to Gillibrand’s or Speier’s ideas. An independent counsel, outside of military command authority, poses two obvious threats: its existence undermines confidence in the ability of officers and enlisted leadership, and it opens up the possibility of criticism and critiques existing outside of the chain of command. As most generals or admirals will happily explain, one either trusts the chain of command to execute justice within the service, or one doesn’t. A timeless military adage goes something like this: “Start worrying about morale only when the soldiers stop bitching.” As I saw for myself in my seven years in the Army infantry, leaders take a skeptical approach to complaints coming from below. In light of that fact—and especially given the overwhelmingly male makeup of military leadership—the prospects for significant institutional or even individual reform don’t look great with McCaskill’s bill.

McCaskill and her primary ally, Michigan Democrat Carl Levin, have, to their credit, a deal of respect for the military, and have listened to the generals and admirals who assure them that sexual assault is something the military takes seriously and can handle internally. But this is one issue where the impetus for change—the “forcing function,” as the military would call it—has to come from outside. Though I never dealt with accusations of sexual assault when I was a commander, I’m convinced that in many cases it is just too difficult for commanders and senior enlisted to make impartial decisions when it comes to this issue. Nor is the military capable of making substantial institutional and cultural changes on its own. Without Congress repealing “Don’t Ask, Don’t Tell,” no general would have begged for a more just policy toward gay service members. Generals weren’t the ones petitioning Harry Truman to desegregate the military, nor did most of them actively lobby Barack Obama or Congress to open combat positions to women.

The military does require a degree of autonomy from civilian institutions in order to enforce discipline—the power to punish quickly and without oversight in certain situations and contexts. This is because the consequences for error in war are so costly. Sexual harassment and abuse is usually not a life-and-death issue, but it can cause immense suffering, and it does real damage to our military capabilities. It should find no refuge in the modern military.

When it became known that Franklin, the commanding officer who convened the court-martial that found Wilkerson guilty, was considering overturning the verdict, Wilkerson’s immediate commander, Brigadier General Scott Zobrist, wrote to him in protest. “Having Wilkerson back on active duty at Aviano, even for one day,” he said in an e-mail, “would complicate all the personnel and clearance actions taken, having a huge negative impact on morale, send a very negative message about how seriously we take assault in the Air Force, and potentially call into question the effectiveness of our UCMJ system in general.” He was right.

Though it represents a significant break from the way the military has handled crimes in the past, Gillibrand’s proposal is the best chance to do real good within the ranks, and maybe even shift the culture for the better. Her bill will allow victims of sexual assault to have a clear and simple path to justice, which necessarily lies outside the chain of command. Its passage would offer some measure of restitution to those, like Wilkerson’s accuser, who’ve been victimized by sexual predators in the military. For those in uniform now, it promises a surer guarantee of protection under the law.