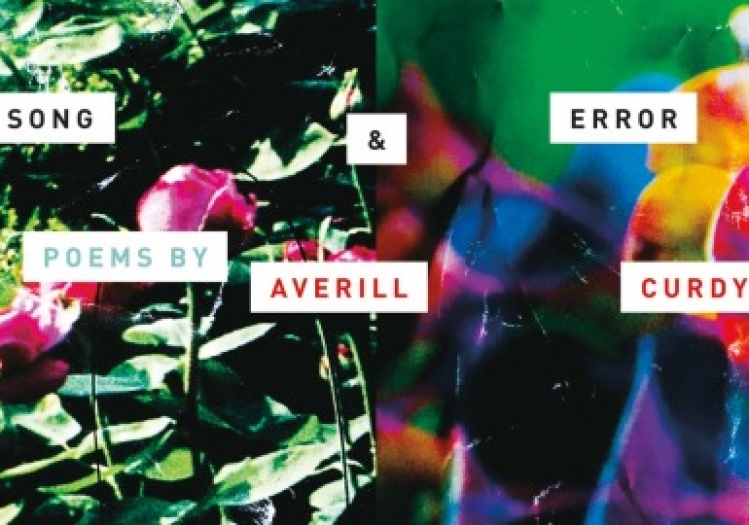 In “Northwest Passage,” a poem that exemplifies the aesthetic of Averill Curdy’s debut collection Song and Error, the narrator stands on a deck under the morning’s “first pale peach jeopardy / of light.” The poem is not Yeatsian in imagery or import, but it does dramatize Yeats’s belief that verse rhythms “prolong the moment of contemplation, the moment when we are both asleep and awake, which is the one moment of creation.” Curdy’s language is soft: light flushes and touches; gardens seethe. Curdy imagines the explorer Martin Frobisher returning to England, three times, with only “fool’s gold.” Frobisher’s ambitious folly is contrasted with the narrator’s comparatively mundane “new world,” of “linden’s melon scent twined / around an untuned engine’s blue carbon / Monoxide.” In this poem Curdy speaks as herself about a world beyond her own before returning to the familiar. Just as often, though, Curdy assumes a persona, describing an imagined world from an imagined point of view.

A former arts administrator, marketing manager, and technical writer, Curdy began writing poetry consistently in the mid-1990s. The art form was a salve, the “secret life inside [her] life.” She earned an MFA from the University of Houston, and regular publication followed in Poetry, the Kenyon Review, and the Paris Review. She co-edited The Longman Anthology of Poetry in 2005. (Writing about this project in Poetry magazine, she observed that “Elizabeth Bishop and Emily Dickinson seem to be the only poets on whom everyone agrees.”) Curdy has claimed that she writes “at the very limit of what I know”—a humble sentiment, and one that accepts poetry’s ability, and perhaps its obligation, to stretch both thought and language.

The persona poem is a literary form that stretches the poet’s whole self by temporarily putting it aside. It should not be surprising, then, that persona poems make up nearly half of this collection. Among those whose voices Curdy assumes are George Sandys, Álvar Nuñez Cabeza da Vaca, Constance Fenimore Woolson, and John Audubon. Sandys is a great choice: he served from 1621 to 1624 as treasurer of the Virginia Company at Jamestown, where he completed his translation of Ovid’s Metamorphoses. “Ovid in America” documents Sandys’s first two years at the colony, beginning with his voyage and the promise that “this page is small yet stout enough / To bear me whole upon it to you.” These words are addressed to Sandys’s correspondent, the poet Thomas Carew, but they feel as if they could just as well be meant for us. Sandys moves from personal discussion to a vivid description of the 1622 massacre. Survivors of the Powhatan attack “languish like sparrows sunk in a frozen pond / staring up at shadows, waiting / The sign that will call them back to life.” “The aftertaste of lead” commingles with “the smell of breakfast.” Curdy’s funereal sense is ripe: Sandys is surrounded by “red garlands of red roses / Wrapped around white throats, white / As bacon fat.” What can be done in the face of such carnage? Acceptance: “I watch the flies at their devotions, & I learn.”

Curdy’s personae work best as lenses rather than mirrors. We get stories told with a distinctive, self-revealing voice rather than outright self-portraiture. “The Fair Incognito” is presented as Audobon’s epistolary account of being asked by a mysterious woman from New Orleans to paint her nude; in payment, she offers a “handsome rifle.” In the strangeness of such an episode “imagination out- / strips event.” What Curdy’s Audobon tells us about drawing, the poet is also telling us about her own art: “to draw well, the eye must abrade / the line over and o- / ver again, not fevered / like the lover, but like the prisoner.” In “From the Lost Correspondence,” Curdy imagines a letter from Woolson to Henry James, who, after Woolson’s apparent suicide in Venice, attempted to submerge her dresses in the lagoon. But they kept rising to the surface. Similarly, this “lost” letter rises to the surface, dragging up hints of missed opportunities and prefiguring James’s regret. Curdy’s Woolson asks James, “Do I confuse you?” Read in the long shadow of her death, the question stings us.

While the personae poems give Song & Error some of its breadth, the depth of Curdy’s work is no less evident elsewhere in this collection—in poems such as “Northwest Passage,” for example, where the range is narrow but not provincial, a fragment of history opening out into the actual. “Dark Room,” the final poem in the collection, shifts the focus from human personae to the world itself as a kind of personality: “some unperishing, excited / Engine, without limit, without us.”

What all the poems have in common is a sharp awareness of perspective: sometimes this means an “I” who is not really Curdy; sometimes it means a “we” where the reader might have expected an “I.” “Visiting the Largest Live Rattlesnake Exhibit in North America” starts with the lament that with each day comes “another dolor.” Silence is followed by the sounds of a single fly, talk radio, and cars “nosing” into a parking lot. The land is desolate “for 100 miles / In any direction,” and only ephemeral novelties entertain the travellers as they begin their long journey to the destination announced in the title. Having arrived, they stand in front of “lit vitrines,” fascinated by pit vipers “so sentient they stared back.” The visitors imagine themselves like the “Royal Society’s frock-coated members,” in shock but entertained by the stories of violence and death in this “New World.” They know there are forces beyond human control, the “blue out of which disaster strikes,” but they aren’t afraid of the snake behind thin glass: “votively we cluster / In the dark.” Such an evocation of ritual would appeal to Yeats, who thought that the “magical practices” of poetry would “create or reveal a single mind, a single energy”—like this poem’s collective narrator.

Whether borrowing a voice from the past or creating a kind of chorus to record shared experience, Curdy’s poems seek to widen the reader’s sense of self by finding room for several selves, real and imagined, within a single mind. Despite their deceptive modesty, they include multitudes.