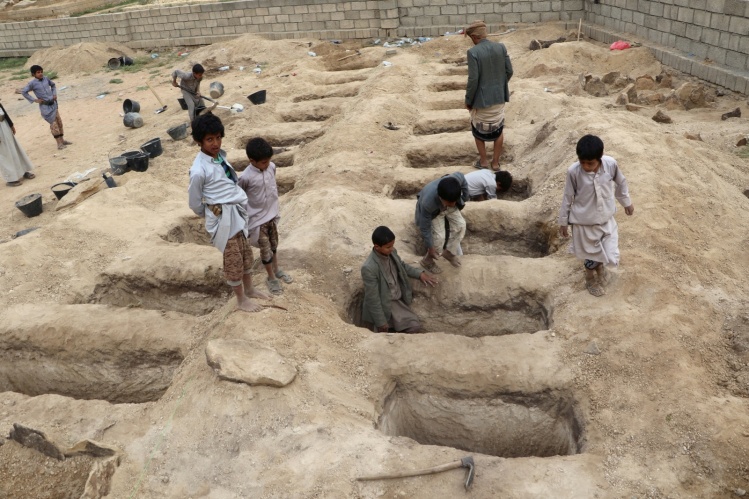 A century ago, as Europe was emerging from World War I, there was a consensus that arms proliferation had been one of the chief causes of the conflict. This is why Article Eight of the Covenant of the League of Nations affirmed that “the manufacture by private enterprise of munitions and implements of war is open to grave objections.” The League was therefore committed to the regulation and curtailment of the private arms industry.

Today, that old consensus has largely been forgotten, and the U.S. arms industry—uncurtailed and inadequately regulated—does a brisk business in every corner of the world, but especially in the Middle East. The effects of this are especially gruesome in Yemen, where since 2015 Saudi Arabia has been engaged in an unremitting air war, supplied and supported chiefly by U.S. arms manufacturers. The Armed Conflict Location & Event Data Project (ACLED) estimates that in the past five years at least 112,000 people have been killed as a direct result of the conflict, including 12,600 civilians killed in targeted attacks. ACLED estimates there were more than 25,000 fatalities in 2019 alone. According to UNICEF, “Yemen is the largest humanitarian crisis in the world, with more than 24 million people—some 80 per cent of the population—in need of humanitarian assistance, including more than 12 million children.” Since the Saudi air campaign began, UNICEF reports that Yemen has become “a living hell” for the country’s children. And the scale of the humanitarian crisis has only been magnified by COVID-19.

Saudi Arabia cannot wage war on this scale without Washington’s seal of approval. According to the Stockholm International Peace Research Institute (SIPRI), Saudi Arabia was the world’s largest importer of arms between 2015 and 2019—the first four years of its war in Yemen—with a whopping 73 percent of those imports coming from the United States. Although U.S. support for the Saudi campaign began under the Obama administration, President Donald Trump has bent over backward to accommodate the Saudis and replenish their arsenal. Three of Trump’s eight vetoes have involved Saudi Arabia’s campaign in Yemen: he blocked two congressional prohibitions of arms sales and a joint resolution directing the removal of U.S. armed forces from hostilities in Yemen.

Generally, under the AECA and the FAA, the executive branch is free to proceed with an arms sale unless Congress passes legislation that prohibits or modifies the proposed sale at any time prior to the actual transfer of arms. Even then, the president may veto this legislation, and then, unless Congress can muster enough votes to override the veto, the sale proceeds. In short, without overwhelming bipartisan opposition to an arms sale Congress’s ability to stop it is relatively modest. In 2019, under the provisions of AECA, Congress passed two resolutions challenging the Trump administration’s arms sales to Saudi Arabia. Trump vetoed them both in July of that year, and that was the end of that.

The U.S. arms industry can sell abroad with relative impunity, especially when it enjoys the enthusiastic support of a sitting U.S. president.
sharetweet

Even worse, the AECA’s relatively weak congressional-oversight provisions can easily be circumvented altogether. Section Thirty-Six of the AECA allows the president to bypass Congress if, within the statutory notice period, the White House informs Congress that there is an “emergency ” that requires an arms sale to proceed without delay “in the national security interests of the United States.”

In May 2019, Secretary of State Mike Pompeo certified just such an emergency, forcing through twenty-two separate arms transfers to Saudi Arabia, the United Arab Emirates, and Jordan. Together, these deals were worth $8.1 billion. The sales to Saudi Arabia included the Paveway and Enhanced Paveway bomb systems, manufactured by Raytheon. Members of Congress objected to this particular deal partly because it would allow the Saudis themselves to begin joint production of the Paveway system once they secured a U.S. manufacturing license. Sen. Robert Menendez, the ranking member on the Senate Foreign Relations Committee, led a bipartisan effort to quash that sale. Menendez also questioned other arms sales to Saudi Arabia, raising concerns about civilian casualties in Yemen and about the murder of the Washington Post columnist Jamal Khashoggi, which many believe to have been ordered by the crown prince of Saudi Arabia, Mohammed bin Salman. In the end, though, none of these objections had any effect: Pompeo’s emergency certification made it possible for the Trump administration to simply sidestep Congress.

Among the many federal watchdogs President Trump has sacked is Steve Linick, the State Department inspector general who was fired in May 2020. At the time of his removal, Linick was investigating Pompeo’s emergency certification. In August, the inspector general’s report was finally issued. It found that, while Pompeo had used proper procedures to expedite the arms sale to Saudi Arabia, he had failed to properly assess the deal’s humanitarian impact on Yemen.

For countries like Saudi Arabia, one of the advantages of working with the U.S. arms industry is precisely America’s lack of any legal requirement to consider the humanitarian impact of an arms transfer to a foreign state. Unlike its European competitors, who are legally obligated to perform such an analysis prior to any arms sale, the U.S. arms industry can sell abroad with relative impunity, especially when it enjoys the enthusiastic support of a sitting U.S. president. This is one of the major obstacles to international efforts to regulate the private-arms industry. The United States is not a party to the 2014 Arms Trade Treaty (ATT)—the heir to Article Eight of the Covenant of the League of Nations and the best hope for increasing transparency in the global arms trade. President Obama submitted the ATT to the Senate for ratification before leaving office in 2016, but President Trump withdrew it from consideration in April 2019. All the European Union’s member states—including major arms producers like France, Germany, the United Kingdom, and Italy—have signed the treaty. Even China, which had been a holdout, signed this past July.

What makes the ATT so important—and the absence of the United States so glaring—is that, unlike other international arms agreements that deal primarily with the illicit arms trade, the ATT restricts authorized arms transfers by state parties. A key provision of the treaty requires that states refrain from exporting arms if there is evidence they will be used to commit atrocities. In other words, the treaty requires the very kind of analysis that the U.S. State Department failed to undertake before it signed off on the arm transfers to Saudi Arabia.

The ATT is not a panacea, but it does introduce a new level of transparency and accountability to the global arms trade. And it is already having real results. In June 2019, the U.K. Court of Appeal determined that the government had failed to assess whether British arms exports to Saudi Arabia might be used in a manner inconsistent with international law. The U.K. government had to suspend all sales while it reviewed its processes.

The war in Yemen is the first proxy war of the ATT era, with one side supplied principally by Iran and the other backed by the Saudis and the United States. The war continues with the tacit approval of three of the four permanent members of the UN Security Council—the United States, France, and the United Kingdom, the three countries that happen to be Saudi Arabia’s major arms suppliers. But France and the United Kingdom, as parties to the ATT, are prohibited from selling arms that will be used to commit human rights abuses, while the U.S. arms industry, working hand in hand with the State Department, operates with no such impediment. Our weapons manufacturers enjoy a highly lucrative freedom to look the other way while the Saudis target noncombatants.

So long as the United States continues to re-arm Saudi Arabia, no questions asked, it is complicit in the atrocities committed in Yemen. That such complicity remains legal in the United States is no excuse—and no accident. Signing the ATT would entail moral obligations that the Trump administration and its friends in the arms industry would prefer to avoid. If President Trump is reelected, there is every reason to believe the State Department will use every tool at its disposal to help the Saudis win their war against the Houthis, whatever the human consequences. Just this August it threatened to invoke its emergency authority yet again to rearm Saudi Arabia without congressional oversight. If Joe Biden wins the election, he must immediately end this indefensible arrangement, and make sure the United States finally ratifies the Arms Trade Treaty. We can no longer pretend not to know—or appear not to care—what is being done with bombs and missiles made in America.