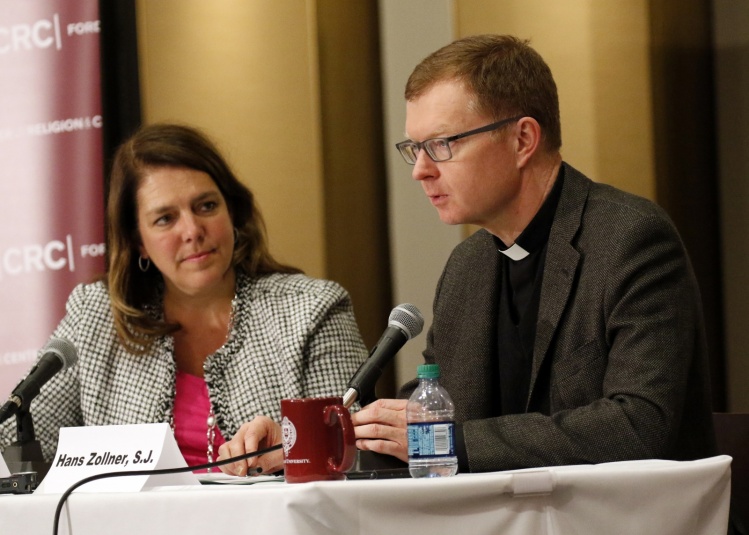 Fr. Hans Zollner, SJ, president of the Center for Child Protection at the Pontifical Gregorian University in Rome, speaks at Fordham University in New York City March 26, 2019. Looking on is Kerry Robinson of the Leadership Roundtable, an organization of laity, religious and clergy dedicated to improving church management. (CNS photo/Gregory A. Shemitz)

I’ve often written in Commonweal of the “cover-up” of clergy sexual abuse in the Catholic Church. But I like a more subtle term that I heard in a Fordham University event featuring some of the most knowledgeable experts on the church’s crisis: “motivated blindness.”

Karen Terry, principal investigator in the John Jay College studies of clergy sexual abuse in the U.S. Catholic Church, cited it as one of the key factors that inhibited the church from responding properly to abuse victims. She was drawing from a 2016 report that Donald Palmer, a professor at the University of California at Davis, researched for Australia’s Royal Commission into Institutional Responses to Child Sexual Abuse. Palmer wrote that “motivated blindness” means “individuals tend to overlook or minimise the significance of events that would have negative consequences for them if fully appreciated.” He is in turn drawing on research by Max Bazerman of Harvard Business School, who wrote in 2014:

When we have a vested self-interest in a situation, we have difficulty approaching it without bias, no matter how well-calibrated our moral compasses may be. Motivated blindness helps explain why we want to think the best of our family members, friends, and colleagues and are disinclined to speak against those with influence in our offices and workplaces. It could also explain why, for decades, high-ranking officials in the Catholic Church failed to investigate complaints of child sexual abuse by priests, and why some Penn State University officials failed to report evidence of similar crimes committed by former assistant football coach Jerry Sandusky to the police. Because of their biases, some of these officials challenged the accounts of victims and witnesses, minimized the severity of the abuse, and overestimated their ability to address the crises on their own.

Speaking at a symposium held in Manhattan on March 26 at the Fordham Center on Religion and Culture, Terry said that while the church has made meaningful change since the first of two John Jay reports was issued in 2002, it has been “slow and inconsistent.” In the past, “little attention was given to the harm that was caused to victims,” she said, adding that studies have found a moral failure “not just because of the harm to the thousands of youths but because the priest abusers and others who knew about or suspected that this abuse was taking place failed to live up to the most basic of their pastoral commitments, which is the care of the most vulnerable in the community.” That’s “motivated blindness.”

Without such a change of heart, procedural rules and laws lack meaning. The rejoinder, though, is that the law has an instructional function.
sharetweet

In the Catholic Church’s case, one of the chief motives for this ethical blindness was the desire to protect the institution from its secular critics. In his report for the Australian commission, Palmer wrote that in a strongly “institutionalised organisation” such as the Catholic Church, members tend to fuse their own identities with the organization’s. In cases of child sexual abuse, “organisational leaders and rank and file members will tend to see these instances as events to be managed in ways that minimise their negative effects on the organisation’s image,” Palmer wrote. “This appears to have been true for the Catholic Church. Members of the clergy withheld information about sexual abuse perpetrated by priests to safeguard the image of the Church.” (That was also true for the Mormon church and the Boy Scouts of America, he added.)

Since the sexual-abuse scandal emerged in 1985, there have been steady complaints that the church was being singled out for criticism. But it is possible for that response to be mostly true and at the same time a subterfuge for avoiding accountability.

Margaret Leland Smith, the data analyst for the data-rich John Jay studies and a speaker at the symposium, said that in the larger society, excuses have so often been offered for abusive behavior because it’s “really difficult for us to accept the extent of unwanted sexual approaches from adults that adolescents experience.” When this began to be revealed in social-science surveys in the 1960s, people thought the numbers had to be wrong—they weren’t. But, she said, it’s not possible to quantify how the Catholic Church’s experience with sexual abuse compares to that of other organizations; no other organization has gathered (and made public) so much data.

Terry said that reform “requires a change in the culture of all the people who are involved in that community, but there is a variability in buy-in. That is what we have seen in the church throughout the United States and in other countries as well.” She added: “We know that change in institutions can happen, but institutional change is slow, and there has to be a commitment to reform by the organizational leaders.”

There is probably no one who knows more about that “variability in buy-in” than the speaker who followed Smith and Terry. Rev. Hans Zollner, a Bavarian Jesuit who is Pope Francis’s point person on the sexual-abuse issue, highlighted some of the changes that have been made in Rome in the past year or so.

When I stopped to think about it later, the most concrete change for me was not in any one thing Zollner said, but that he was there at all. For someone like him to come from the corridors of church power in Rome to speak frankly and answer pointed questions without being defensive—that is change. Zollner, who is president of the Centre for Child Protection at the Pontifical Gregorian University and a member of the papal commission on sexual abuse of minors, organized the February summit at the Vatican on sexual abuse.

His insistence—Pope Francis’s insistence—on the primary need for a change of heart was consistent with the research I’d just heard. The argument is that without such a change of heart, procedural rules and laws lack meaning. The rejoinder, though, is that the law has an instructional function.

Zollner said there will be concrete changes made as a result of the February meeting, which include new reporting requirements for allegations within Vatican City and guidelines for bishops on handling abuse allegations. The first step came March 29 when the Vatican announced the new requirements for mandatory reporting of sexual abuse allegations within Vatican City. Vatican spokesman Alessandro Gisotti said in a statement that "this is the first important step following the summit of the Episcopal Conferences” a month earlier. But another way to look at it is that eight years after telling all bishops’ conferences to create anti-abuse guidelines and six years after telling the United Nations that it was creating a “safe environment” program for the city-state, the Vatican has finally acted for itself.

If one thing came through in the Fordham symposium, it is that the pace of change will be slow in such a large and heavily institutionalized organization as the Catholic Church. And yet, Zollner predicted a “transformational process” in the church, with the result of greater inclusion for lay experts and involvement of lay people. “Human beings tend to love what they have always known, and as it has always been, in personal life and in institutions,” he said. “The church in twenty years, maybe fifty years, will look very different to what we know now.”

How to Alienate Millennials from the Pro-Life Movement