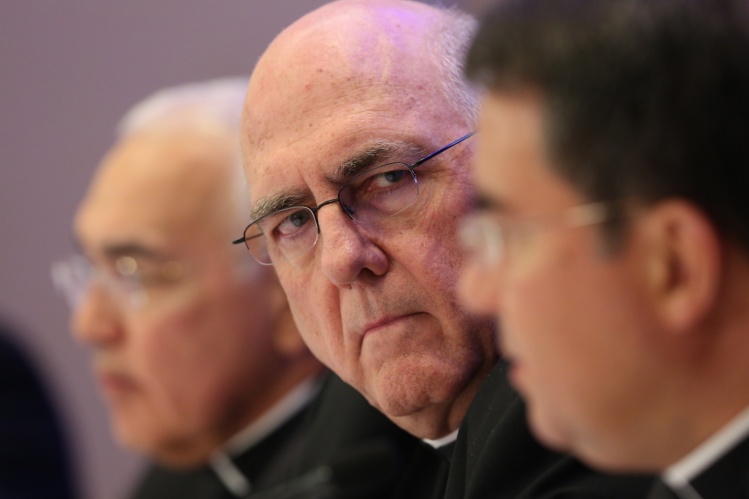 Archbishop Joseph F. Naumann looks on as Bishop Oscar Cantu responds to a reporter's question during a Nov. 13 news conference at the fall general assembly of the U.S. Conference of Catholic Bishops in Baltimore. (CNS photo/Bob Roller)

Most Catholics didn't lose any sleep over who would be elected chairman of the prolife committee at the U.S. Conference of Catholic Bishops’ national meeting in Baltimore this week. But the choice between Chicago Cardinal Blase Cupich and Archbishop Joseph Naumann of Kansas City represented something of a referendum on whether or not the U.S. hierarchy is coalescing behind the priorities and pastoral vision of Pope Francis nearly five years into his papacy. In a rarity for ecclesiastical politics, the vote even generated a lengthy Wall Street Journal preview story that anonymously quoted a bishop remarking on the election’s broader significance.

Cupich lost the election to lead the bishops’ prolife committee to Naumann by a count of 96-82, the first time in more than forty years that a cardinal on the ballot did not win. Appointed by Francis to lead the nation’s third-largest Roman Catholic archdiocese in 2014, Cupich has used his prominent pulpit to address gun violence, health care, capital punishment, and economic inequality—not only as social challenges, but as urgent prolife issues. If abortion rightly shocks the conscience, Cupich wrote in a Chicago Tribune op-ed, “we should be no less appalled by the indifference toward the thousands of people who die daily for lack of decent medical care…or who are executed by the state in the name of justice.”

The cardinal is playing a key role in reviving the consistent ethic of life framework championed decades ago by another Chicago cardinal, Joseph Bernardin, who for awhile became the public face of U.S. Catholicism. He offered a bold, controversial approach to defending human life that rejected single-issue politics, drawing opposition from powerful conservative bishops who feared that approach would water down the church’s stance on abortion. During the lengthy pontificate of John Paul II, Bernardin’s efforts were beaten back by bishops and other influential Catholics who elevated abortion as the preeminent issue for the church’s public engagement.

Naumann, the Kansas City archbishop who will now lead the bishops’ prolife activities, has culture-war instincts that reflect a starkly different style and set of priorities than Pope Francis and Cardinal Cupich. For example, Naumann asserted that the Girl Scouts embodied “a hostile secular culture” when he severed ties with the organization in his diocese a few months ago because of their associations with groups that support abortion rights, contraception, and LGBT equality. In his diocesan newspaper, the archbishop publicly rebuked Democratic vice-presidential candidate Sen. Tim Kaine, a Catholic, for his support of abortion rights. When Kathleen Sebelius served as governor of Kansas he publicly told her to refrain from receiving Communion because of her position on abortion. “The issues that pertain to family life, to marriage, to the dignity and sanctity of human life, do have a priority in our Catholic social teaching,” Naumann said in an interview with Crux during last fall’s presidential election. “Those are kind of foundational issues for us…I would say, however, in terms of the magnitude of things, abortion is a much more important issue, simply because of the sheer number of innocent lives that are taken every year in our culture.”

There is not a Catholic bishop with breath in his lungs who doesn’t consider abortion a grave evil.
sharetweet

There is not a Catholic bishop with breath in his lungs who doesn’t consider abortion a grave evil. Pope Francis unambiguously denounces what the church considers to be a direct assault on innocent human life, as does Cupich. What's at stake for the church isn’t whether or not bishops will speak out against abortion, but what framework the church can use to understand and express its commitment to defending life without getting boxed in by a two-party political culture. The late Archbishop John Quinn, a former president of the U.S. bishops’ conference, reflected on this challenge in 2009 after the University of Notre Dame faced an ugly backlash from conservative bishops and activists when President Barack Obama was invited to give a commencement address:

The condemnation of President Obama and the wider policy shift that represents signal to many thoughtful persons that the bishops have now come down firmly on the Republican side in American politics. The bishops are believed to communicate that for all the promise the Obama administration has on issues of health care, immigration reform, global poverty and war and peace, the leadership of the church in the United States has strategically tilted in favor of an ongoing alliance with the Republican Party. A sign of this stance is seen to be the adoption of a policy of confrontation rather than a policy of engagement with the Obama administration.

Archbishop Quinn underscored that “there is no disagreement within the U.S. bishops’ conference about the moral evil of abortion, its assault upon the dignity of the human person, or the moral imperative of enacting laws that prohibit abortion in American society.” But, he continued, “there is deep and troubled disagreement among us on the issue of how we as bishops should witness concerning this most searing and volatile issue in American public life. And this disagreement has now become a serious and increasing impediment to our ability to teach effectively in our own community and in the wider American society.”

These warnings largely went unheeded in the American hierarchy because those with power and influence in the church at the time, both in the United States and Rome, profoundly disagreed with that analysis. Four years after Quinn's commentary, Pope Francis was elected and immediately jolted the church by proposing a different approach. “We cannot insist only on issues related to abortion, gay marriage and the use of contraceptive methods,” the pope said in a stunning interview early in his pontificate. “The teaching of the church, for that matter, is clear and I am a son of the church, but it is not necessary to talk about these issues all the time. The church’s pastoral ministry cannot be obsessed with the transmission of a disjointed multitude of doctrines to be imposed insistently. We have to find a new balance; otherwise even the moral edifice of the Church is likely to fall like a house of cards, losing the freshness and fragrance of the Gospel.” In his encyclical, Laudato Si', Francis argued that abortion, the devastation brought on by climate change, and the ravages of economic inequality all take lives and should not be understood separately. “Everything is connected,” Francis emphasized.

It is finding this “new balance” that American bishops have been wrestling with since Francis's election—and so far the results have not been always been encouraging. This week's defeat of Cardinal Cupich amounted to “the bishops giving the middle finger to Pope Francis,” wrote Michael Sean Winters at the National Catholic Reporter. Winters is right, though I don't believe the situation is without hope. Cupich’s defeat certainly demonstrates that a significant slice of the American hierarchy is either ambivalent or opposed to Pope Francis’s vision for how the church should prioritize issues and engage with politics. But the church turns like an ocean liner, not a speed boat. And change is happening. Two years ago Cardinal Daniel DiNardo, president of the bishops’ conference, pushed back against efforts from bishops who reflected Francis's approach to make the conference’s election year document, Faithful Citizenship, more reflective of the pope’s teachings on economic inequality and environmental degradation. This week, however, DiNardo spoke about protecting undocumented immigrants and keeping immigrant families together as a “prolife policy.” The specific use of prolife framing to address immigration shows that Pope Francis is influencing the way bishops speak about public policy questions.

Reformers need time. The pope needs five more years of appointing the kind of bishops in the United States that will help reclaim a more effective public voice for the church. Cardinal Cupich may have lost the vote to lead the conference's prolife committee, but he holds an even more important role. Last year, Francis appointed him to serve on the Vatican's Congregation of Bishops, an influential post that lets him advise the pope on who will be named new bishops. For now, the future of the American hierarchy is in good hands.