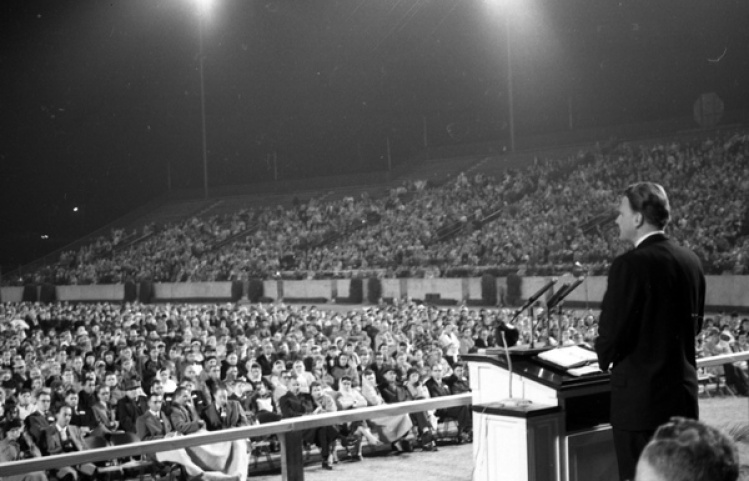 This article first appeared in the July 25, 1969 issue of Commonweal

The ads on the side of the bus told it all. One proclaimed that Billy Graham would be preaching at the Garden. It was done in blue and gold lettering designed to get the message across with a simple dignity. It did not assault the reader, it merely informed him. The other offered Bain de Soleil as the answer to all your suntan problems. It also was designed to get the message across. She was slim and tan and nearly naked and triggered a variety of indecent thoughts. As they rode together up and down the streets of New York competing for people's attention, you didn't have to ask which was winning.

If it may be said that Billy Graham did not succeed in Gotham City, it was not for want of trying or for want of skill. His Crusade Team exhibited the technical and managerial proficiency worthy of any first rate, multi-million dollar corporation. Their logistical ability extended from individual advisors of similar age and sex for the newly converted, to a soft drink lounge and press kits for the media. It was a smooth and flowing operation run by well dressed men with moderated accents. Understanding that the average reporter was secretly searching for the staff Elmer Gantry, complete with whip and black morning coat, the Crusade Team was a study in disarming friendliness. They were in New York to save souls in large numbers and planned to use the most efficient, effective method to bring the Word of God to a city of eight million. As one flyer announced, "Billy Graham is able to preach to more people on one telecast than the Apostle Paul reached in his lifetime."

The main arena of Madison Square Garden seems to dramatize whatever cause is currently paying the rent, from Gene McCarthy's friends to George Wallace's minions. Standing outside, you can see through its grey glass shell to the banks of esacalators which circle the building. Full of the faithful ascending to the upper tiers, it presents a practical picture of what Judgment Day may be like—one more line. With the platform placed at the west end rather than center, Graham was able to look out at nearly 20,000 people at once. Behind him sat a choir, 2,000 strong and clad in white. From the ceiling some 500 feet above, a battery of television and spot lights illuminated the stage in a bath of electrical splendor. It was impressive, professional. If there were an Elmer Gantry in the house it was clear he was more likely to be in the audience than on the team.

While the physical layout was uplifting, the speakers on the platform somehow never quite managed to match their surroundings. One problem was language. In 1957, when the Graham Crusade was last in New York, we were still more or less one people. We all spoke the same language, and if Kerouac and others were using funny words their readers were few and their influence fractional. By 1969 we were clearly divided, Nixon notwithstanding, the older from the younger, the black from the white, the cosmopolitan from the hinterlander. Each group had different problems, different fears, different devils and different words to communicate all three. An early tipoff of Graham's failure to understand the cracks in America was the fact that a program taped in New York was relayed simultaneously to Boston, Cleveland and Greenville, North Carolina.

An early tipoff of Graham's failure to understand the cracks in America was the fact that a program taped in New York was relayed simultaneously to Boston, Cleveland and Greenville, North Carolina.
sharetweet

As the Crusade progressed, it became apparent the problem was deeper than poor network scheduling. Phrases like "turn on and tune in to Jesus" were mixed with "a mighty fortress is our God." Young people were told they were looking for "a song to sing, a flag to follow, a creed to believe," while at the same time reported to be "hung up on drugs, on sex, on escape from the world." The audience was instructed to "do your own thing" at one point and to "devote your life to Jesus" at the next. Watching the Crusade over a period of nights brings some understanding of what the Tower of Babel must have sounded like. Graham and his "Associate Evangelists" chose their words so indiscriminately you were never quite sure exactly to whom they were talking or what they were trying to say. For those who came to hear the word it was a point of no consequence, but the skeptical ones caught on right away. Turning to a companion after hearing Graham speak non-stop for an hour, one listener asked, "What the hell was that all about? Nothing he says follows any logic!"

A further problem was the discrepancy between those the Crusade was trying to reach and the people who came to listen. Half of those who filled the Garden were repeaters. They had been there the night before and would come back again the next night. As one believer put it, "I wish there were a Crusade every night." For a Crusade which was held in Manhattan, there were too many buses from southern New Jersey and rural Pennsylvania.

The biggest problem, of course, was the young. If Billy Graham and his associates came to New York for any one group, it was the urban young. With their long hair or their black skin, with their four-letter words and dismissal of all Graham represents, the urban young were the real challenge. To meet it Graham hired a hall in a loft two blocks from the Garden. He opened a coffee house and filled it with strobe lights and psychedelic accessories worthy of any discotheque in town. Three bands played rock music while video screens flashed fancy patterns with the name of Jesus and Love alternating in and out, or a question mark that blurred into a cross. Coffee was the strongest beverage served but in a city full of boredom the kids came anyway. And if you looked hard, past the out-of-staters or the apprentice preachers, the kids made you awfully nervous.

Janet is about 16 and comes from southern Jersey, where people are sparse and horizons limited. She's here with her mother's church group. If she sleeps with men she keeps it to herself. She says she's never smoked pot. Her chest is a little fiat and her clothes a little too lacey. Her face is calm but her eyes dart back and forth like the strobe lights and she uses words like "shit" and "crap" and it reminds you of Bonnie and Clyde. She liked Bonnie and Clyde. She saw it three times. Janet is here because her mother wanted her to come. Billy Graham is "alright I guess," and she defined her relationship to Jesus with a shrug. Her father, a foreman in a metal parts factory, she classified as "a shit."

Teddy says she's 21. She looks 17. She comes from the East New York section of Brooklyn, designated "a neighborhood in transition" by local urbanologists. It's a tough place to live and her language reflects the native idiom: blunt and vulgar. She is here with her friend Pat who wears an Indian headband and no bra. One of their girlfriends at work told them about the place. They've "messed" with drugs, they like one of the bands, and they haven't the slightest idea who Billy Graham is or why they should "dig Jesus." With no minimum or cover charge to pay, they're looking for "new boys" and not asking too many questions.

Calvin is black, 18, a preacher in his church and committed to Christ. When asked about Graham, he answers, "The man is doing the Lord's work and I speak no evil against anyone who does the Lord's work." He believes the final Judgment Day is at hand. He feels his ministry is with the black people, and whites "must spread the gospel to the whites." When asked about the integrational aspects of the setting, he smiles and points out you're the only white man at the table.

So in the end, despite his efforts, Graham failed to reach the group he came to speak to and failed to dent the life-style of the town. He was reduced to encouraging those already convinced to "witness for Christ" in a world frankly bored by their convictions. Some of his critics said that by ignoring the hatred of the black man and the white, the violence which is now so much a part of us, our slaughter of each other by the rifle and the knife, the killing of our children in a hundred subtle ways, and our failure to explain to the young how we created this horror house, Graham ignored the meaning of a city like New York. By failing to speak to the meaning of the City he doomed any chance of touching the uncommitted. But the criticism smacks too much of familiar liberal religious rhetoric.

For Graham could have preached the Kerner Report and the general response would have been the same. In a city where "I am Curious" plays to a packed house six months after everyone has called it garbage, any man of God is playing against a loaded deck. If the Graham Crusade failed to spark the fire of faith, it wasn't for lack of salesmanship. The people decided they just didn't want the product.

Tags
Domestic Affairs
Secularism and Modernity
Ecumenism
From the Archives

Philip Tracy is a New York free-lance writer. This is his second appearance in Commonweal.