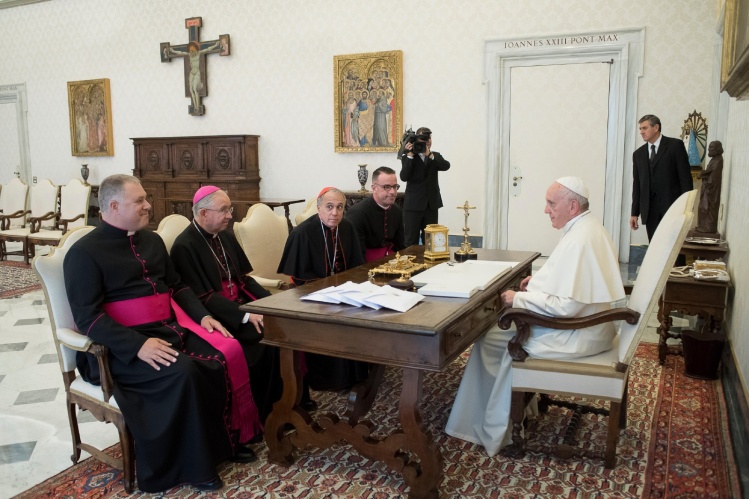 An October 10 press release for the upcoming meeting of the U.S. Conference of Catholic Bishops (November 13-14) announced the gathering’s agenda. It consists mostly of reports and committee votes and business as usual. But a lot has changed since October 10. The bishops ought to scrap that agenda. Instead they should talk seriously about how they are being called to change—as a conference—in response to the leadership of Pope Francis.

The kind of change the pope has repeatedly called for—from the whole church as well as from the bishops—is different from “doing better” that which we’re already doing. The pope, from Evangelii Gaudium onward, has called repeatedly for a radical re-evaluation of priorities and outlook. Yet so far it seems the USCCB has shown precious little interest in doing anything other than what they already planned on doing.

Consider how Francis’s recent motu proprio, Magnum principium, has caused not even a ripple. A month after he announced a basic and consequential change in the bishops’ responsibility for liturgical translations, giving them new criteria by which to judge the prior instruction on translation, Liturgiam authenticam, what do we see on the agenda? They are going to vote on the new translation of the Order of Baptism, prepared according to Liturgiam authenticam. It’s as if Magnum principium didn’t even exist.

To be fair, it could be that the bishops’ advisors on canon law told them Liturgiam authenticam is still in force and therefore nothing really changed. But if so, that was misleading advice. If you read the whole motu proprio, and not only the canonical text, the need for a genuinely new departure stares you in the face. The bishops’ conference of New Zealand got the memo. The German-speaking bishops got the memo. Why does it seem there is so little comprehension among our bishops when they read what Pope Francis has to say? They seem to be screening out anything that would call for change.

Yet change is indeed in the wind, and subsequent events have sharpened the point. On October 22, Pope Francis publicly corrected Cardinal Robert Sarah of the Congregation for Divine Worship, when he voiced the opinion that translations would still be subject to Liturgiam authenticam in all its particulars. Whatever the bishops thought when their agenda was being drawn up, do the bishops now still think “everything will stay the same”? Are they seriously proposing to approve new texts prepared according to Liturgiam authenticam, as if the implications of Magnum principium, laid out in black-and-white by the Holy Father, don’t matter?

Their advisor on doctrine denounces the pope and they call this “dialogue”?
sharetweet

Indeed, a lot has happened since October 10—and not only in relation to Magnum principium. In case you missed it, a prominent advisor on doctrine to the U.S. bishops, Capuchin Father Thomas Weinandy, released to the press a letter in which he mounted a serious attack on Pope Francis, accusing him of misleading the faithful, appointing bishops whose teaching promotes falsehoods, demeaning doctrine itself, and risking—I kid you not—the sin against the Holy Spirit.

In response to this outrageous and scandalous sally, Weinandy was (appropriately) asked to resign as advisor to the bishops. Yet Conference President Archbishop Daniel DiNardo offered a statement that amounted to only the gentlest demur—replete with anodyne comments about the value of dialogue. Dialogue? Their advisor on doctrine denounces the pope and they call this “dialogue”?

It’s flabbergasting. The fact that someone whom they trusted in the important area of doctrine could malign their brother bishops and come out with the grave suggestion that the pope might be committing a sin against the Holy Spirit—the only sin that scripture says “cannot be forgiven”—seems curiously not to have disturbed them much.

Where’s the outrage? I’d even take some healthy embarrassment. DiNardo’s statement ends with what is supposed to be an affirmation of solidarity with the pope, but which comes out as pro forma: “Let me assert that we always stand in strong unity with and loyalty to the Holy Father, Pope Francis….” Ah yes, we support the pope. As always.

Surely the USCCB can do better than this. It needs to take a stronger public stand backing Pope Francis, or else—if they really want to—they should declare that they back Weinandy. Anything less at this point is going to confuse the faithful. I know I am confused. And my confusion stems not from anything Pope Francis has said or done. To my mind, he has been crystal clear. My confusion is rather about what our bishops think they are doing.

Incidentally, the Vatican itself might bring a better agenda into play at the upcoming conference. Rocco Palmo recently reported that Vatican Secretary of State Cardinal Pietro Parolin will be present at the bishops’ meeting and preside at its one-hundredth anniversary Mass—an unusual appearance, Parolin’s first solo visit to the United States. Palmo foresees a significant moment:

As the milestone [the hundredth anniversary] commemorates the global church’s first modern effort of collegial governance by a national body of bishops—and with it, the inception of the church’s return toward a spirit of synodality which the pontiff has aimed to turbo-charge—between Parolin’s current role and his personal history as a doctoral student of the Synod of Bishops, the message the Cardinal-Secretary delivers with his master’s voice is likely to have a resonance far beyond these States. (Adding to the context, while the prefect of the Congregation for Bishops, Cardinal Marc Ouellet, was initially slated to preach the Centennial Mass, the Canadian hatmaker-in-chief suddenly evaporated from the plans over the last year, with Parolin taking the homily for himself.) Indeed, the scene is bigger than the moment: after decades of Curial attempts to crack down on the purview of the conferences, Francis’s new norms on liturgical translations (and the pontiff’s subsequent doubling-down on them) are just the latest proof of how dramatically the pendulum has shifted back in the benches’ direction.

The implication of Palmo’s remark is that Magnum principium is significant not only because of what it will do to translations of liturgical texts, but also because returning authority to the bishops is part of the pope’s overall plan to build a more synodal Church. Amen to that. Pope Francis is asking the bishops to take greater responsibility for their regions conjointly with one another, yet always under his leadership and in communion with him.

Will our bishops do anything more than listen politely, applaud lightly, and then go about their business as if nothing has changed? Let’s hope so.