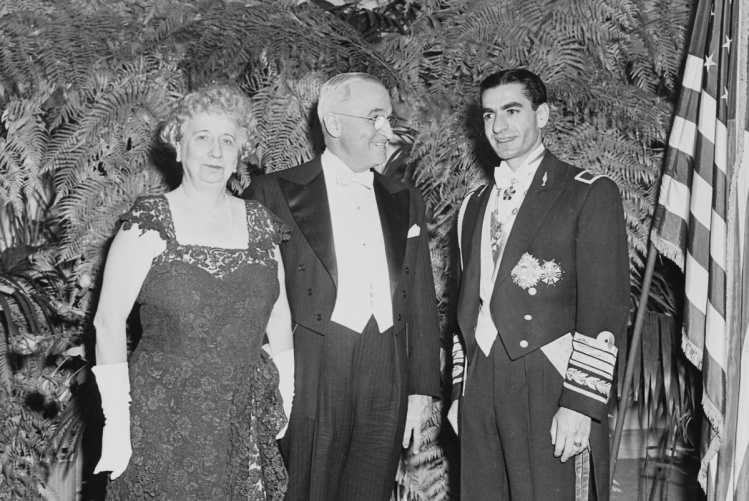 President and Mrs. Truman with the Shah of Iran, November, 1949

The wonderfully evocative title of this book does not accurately convey its actual contents. A more apt, if also far less graceful title might be something like this:  “Manufacturing Knowledge: How U.S. Attempts to Understand the Middle East Yielded Bogus Conclusions and Ill-Advised Policies.”

America’s Dream Palace describes a century-long collaboration between U.S. policymakers largely ignorant of the Middle East and the entities to which they turned for enlightenment. Osamah F. Khalil, an assistant professor of history at Syracuse University, begins his story in World War I when the dismantling of the Ottoman Empire drew President Woodrow Wilson’s attention to the region. He concludes with the post-9/11 period, when agenda-driven pseudo-scholars endorsed the George W. Bush administration’s bizarre insistence that it was incumbent upon the United States to transform the Islamic world, if need be at sword point.

In a sense, Khalil has written two books that he melds into a single manuscript. The first book describes and evaluates the various impulses, prejudices, and intellectual fads that over time have influenced U.S. policy in the Middle East. The second recounts the backstage maneuverings by organizations and individuals intent on generating policy-relevant insights and bringing those insights to the attention of high-ranking officials. The first book, dealing with ideas, is interesting and instructive. Some readers may consider the second book, which is about process, a bit of a snooze. Together the two warn of the perils of professionalization.

Prior to World War I, except as a field for missionary activity, the Middle East attracted minimal American attention. The small U.S. foreign policy establishment possessed little pertinent expertise. The advisers recruited to prepare President Wilson for the Paris Peace Conference that would determine the region’s fate specialized in saving souls and studying antiquities, not in great-power politics. Wilson’s own instincts emphasized paternalism, assumptions about Muslim inferiority blending seamlessly with his serene confidence in American altruism.

In the face of British and French imperial scheming, however, Wilsonian high-mindedness never stood a chance. The resulting settlement settled nothing, while laying the basis for a host of problems destined eventually to land on Washington’s doorstep. The lesson seemed clear: When playing with the big boys, amateurs get their pockets picked.

By World War II, U.S. interests in the Middle East had grown and increasingly centered on oil-rich Saudi Arabia. Efforts to professionalize regional expertise now fell principally to the Office of Strategic Services (OSS), wartime forerunner of the CIA. In a crash effort to build a cadre of Middle East hands, the OSS recruited Ivy League faculty and various bluebloods, leading critics, Khalil writes, to charge that OSS actually stood for “Oh-So-Special.” Within the organization’s high-toned ranks, Orientalism and American Exceptionalism came naturally.

So too did yet more fumbling amateurism. By way of an example, Khalil cites a speech by President Franklin Roosevelt, delivered after U.S. forces had landed in North Africa and then rendered into Arabic by an OSS operative intent on maximizing its appeal to Muslims. “Behold,” read the translated text. “We the American Holy Warriors have arrived. Our numbers are as the leaves on the forest trees and as the grains of sand in the sea. We have come to fight the great Jihad of Freedom. We have come to set you free.” As to how the intended recipients of FDR’s exhortation received it, Khalil is silent.

Although World War II did not mark a quantum leap in American understanding of the Middle East, U.S. regional ambitions became larger. According to Khalil, these centered on “oil, air bases, and future markets,” with opposition to Soviet influence soon joining that list. As interests expanded, so too did the level of U.S. engagement.  Beginning in the late 1940s, the Middle East became an arena of intense CIA activity.

To improve its ability to understand the region, the U.S. government, with the CIA as lead agency, pursued a more comprehensive approach to creating expertise. In place of wartime expedients, the CIA sought to institutionalize mechanisms for producing both knowledge and individuals able to put that knowledge to work in advancing U.S. national-security objectives.

In this effort, the CIA found willing partners in major American universities and foundations. Pursuant to waging the Cold War, the CIA and foundations such as Ford, Rockefeller, and the Carnegie Corporation had money to spend. To expand academic offerings and fund individual research, universities were keen to help with the spending.

Few had qualms about where the money came from or the purposes to which the research might be put to use. During the 1950s, this arrangement fostered the rise of an academic enterprise known as Middle East Studies (MES), a multidisciplinary approach aimed at creating a corps of specialists who upon graduation would find employment in the CIA, State Department, or military services. Professionals would thereby supplant amateurs.

Pursuant to waging the Cold War, the CIA and foundations such as Ford, Rockefeller, and the Carnegie Corporation had money to spend.
sharetweet

Khalil views the enterprise as highly suspect. With the imperative of pleasing the client an overriding consideration lest funding dry up, MES programs created even (or especially) at top-ranked universities such as Harvard and Princeton tended to be superficial. Rather than challenging preconceived notions, the MES project reinforced them. Not least among those notions was an abiding conviction that Arabs and other Muslims were temperamentally incapable of managing their own affairs. If the peoples of the Middle East were to escape from backwardness and embrace Western-style modernity—the assumed destiny of all of humankind—they would require American coaching and assistance. MES trained coaches.

The resulting coaching staff, Khalil notes, included American diplomats and military officers keen to facilitate arms sales. Indeed, the principal expression of modernity that the United States succeeded in transferring to countries like Saudi Arabia and Iran came in the form of advanced weaponry, a boon to the military-industrial complex, if not to the region.

This arrangement lasted into the 1970s, when a changing mood on campus, fostered by the Vietnam War and revelations of CIA improprieties, made it impossible to sustain. MES programs survived, but now became critical of U.S. Cold War policies, and perhaps more importantly, of Israel, precisely when supporting the Jewish State was emerging as a first principle of American politics. In the formulation of policy, universities had been players;  now they became bystanders.

The resulting void, Khalil writes, provided a made-to-order opportunity for think tanks to move in. Think tanks, especially those based in Washington, exist to shape elite opinion. While purporting to sponsor disinterested research, they actually promote a particular point of view, reaching conclusions that align with the preferences of the foundations, corporations, or wealthy individuals who pay the bills. It’s lobbying, dressed up with scholarly footnotes.

Khalil’s survey of the think-tank world is a bit cursory. Of those with a Middle East agenda, he focuses on just two: the Washington Institute for Near East Policy dedicated to preserving and deepening the U.S.-Israeli special relationship; and the American Enterprise Institute, which flogs Islamist terror as an existential threat and is gung ho to unleash the U.S. military to put things right. The former offers regular updates on the never-ending “peace process.” The latter provides neoconservatives with a platform to campaign for more war.

In reality, on matters related to the Middle East, the landscape of Washington think tanks is more diverse than Khalil implies and the views on offer more varied. That said, he is surely correct in arguing that the “ideas” that emerged from the think-tank world to shape the U.S. response to 9/11 and that even today continue to influence U.S. actions in places like Iraq and Syria bear a remarkable similarity to the counsel that earnest missionaries and ivory-tower academics offered to Woodrow Wilson back in 1918: that the people of the Middle East are incapable of managing their own affairs and that providence summons America to tutor them.