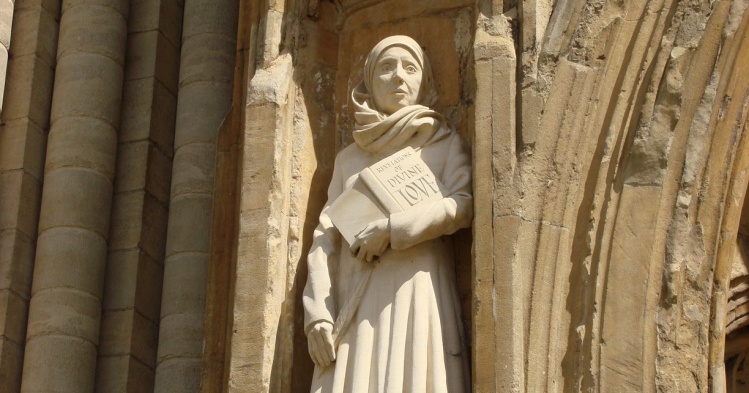 Karen Kilby, an occasional Commonweal contributor, is the Bede Professor of Catholic Theology at Durham University. Although Kilby lives and teaches in England, she is an American by birth. She majored in math and religious studies as an undergraduate at Yale, before receiving a PhD there. As a graduate student she worked with the Lutheran scholar George Lindbeck, author of the influential The Nature of Doctrine: Religion and Theology in a Postliberal Age, and the formidable Kathryn Tanner, author of Christ the Key.

Kilby is the author of Karl Rahner: A Brief Introduction and Balthasar: A (Very) Critical Introduction. Both are first-rate. I am a journalist, not a theologian, but I do read academic theology and back in the day used to edit it into something accessible to the general reader. I think good theological writing, like Kilby’s, makes for stimulating reading as well as sharper thinking on a host of non-theological questions. Her new book, God, Evil and the Limits of Theology (T&T Clark, $90, 176 pp.), a collection of essays first published in theological journals, is both challenging and rewarding. Kilby discusses abstruse theological questions clearly and with intellectual modesty. This is a theologian who praises the “deep beauty which lurks in Karl Rahner’s” work but is candid about his “sometimes torturous writings.” She convincingly demonstrates that Hans Urs von Balthasar is more of a mythologizer than his conservative theological champions might be willing to concede. Refreshingly, she is also a believer who acknowledges that the “beautiful, orderly ideal” of Christian truth and life needs to include “thinking about the boredom, the conflicts, the inadequacies, the sheer ordinariness that marks so much of most Christians’ experience of being a Christian and being in community with other Christians.” Welcome to Sunday Mass.

The problem Kilby tackles in her new book concerns one of the central paradoxes of theology: “How does one engage in a mode of enquiry—an enquiry which includes argument, disagreement and debate—if one presumes in advance that the ‘thing’ under discussion is and must remain mysterious, beyond understanding?” To illuminate that riddle, Kilby devotes essays to the Trinity, to the conundrums of theodicy and the meaning of suffering and evil (or its absence), and to the possibly complementary relationship between “pure mathematics” and theology. This is sometimes difficult material, but she leads even a lay reader through the theoretical thickets (including the infinity of prime numbers and Godel’s incompleteness theorem) with a gentle and steady hand.

Particularly striking is Kilby’s discussion of how we might think about suffering and loss by recovering the Christian tradition’s understanding of evil as a nullity—as the absence of good rather than an ontological reality of its own. A while ago I wrote a piece for Commonweal about Jean Donovan, one of the women missionaries raped and murdered by a Salvadoran death squad in 1980 (she was just twenty-seven). As it happens, I went to high school with Donovan, but only discovered that connection decades after her death. Her courage was remarkable and humbling, and her brutal and senseless killing left one asking all the familiar questions about how and why a loving and all-powerful God could create a world in which evil and suffering flourish.

A better way to think about misery and death is to reject the idea that there is some “dimly perceived and mysterious ultimate value in suffering and loss.”
sharetweet

Many Christian theodicies, Kilby writes, have tried to imbue such suffering with meaning, just as they stress the importance of Christ’s suffering on the Cross. “It seems hard to resist the conclusion that a Christian must revere something in loss and death itself—that these are in some ways good,” she writes. Reflecting on the writings of Julian of Norwich, Kilby suggests that a better way to think about misery and death is to reject the idea that there is some “dimly perceived and mysterious ultimate value in suffering and loss.” Kilby is not saying we can be indifferent to the pain of others. Rather, she is trying to make sense of Julian’s faith that our suffering is nevertheless “bounded by time” and that in God’s good time “all shall be well, and all shall be well, and all manner of things shall be well.” As Christians, our understanding and knowledge is foreshortened. “Our desire for an explanation, for a story that makes sense of both love and suffering, simply is not met,” Kilby writes. “A life of faith is a life lived with a tension which, before the last day, cannot, for either Julian or her readers, be resolved.”

One of the more inexplicable aspects of Donovan’s decision to return to El Salvador was the fact that, to many of her friends, she seemed to be heedlessly courting death. Her decision looked irrational, immature, or incomprehensible to those who begged her not to go back to a place where activist Christians were being killed. Kilby offers a different way of understanding what at first looks like a reckless embrace of suffering. Might not such martyrdoms testify to the truth of the privatio boni tradition in Christian theology, which grants evil and sin no meaning? “On the level of the course of action chosen, the living out of the commitment, we do have an ultimate indifference, in the sense that the action taken is taken exactly as if there were no threat of suffering or loss,” Kilby writes. Thinking about Jean Donovan’s actions in this way is not easy if we insist on reconciling propositional definitions of God’s omnipotence with the existence of evil, but it does help make sense of what is so powerfully moving about Christ’s sacrifice on the cross and the witness of Christians like Donovan.

In her discussion of the Trinity, Kilby cautions against efforts by some theologians to find in the Trinity’s three-persons-in-one formulation a social or political model for how Christians should act toward others. That sort of “projection” risks domesticating the mystery and ultimate unknowability of God. “It is a mistake,” Kilby suggests, “to look for Trinitarian theology to have too practical a payoff, socio-politically or otherwise: it is wrong to insist that the doctrine of the Trinity must be justified in some sort of functional way.” Of course, the Trinity does tell us something important about how to talk to and about God. But the doctrine should be understood as “grammatical,” Kilby writes, “a rule, or perhaps a set of rules, for how to read the biblical stories, how to speak about some of the characters we come across in these stories, how to talk about the experience of prayer, how to deploy the ‘vocabulary’ of Christianity in an appropriate way.”

The book’s concluding essay, “Beauty and Mystery in Mathematics and Theology,” is an eye-opener for anyone who thinks mathematics is solely about exacting calculations, measurement, manipulation, and control. Kilby explains that the field of “pure” mathematics does not describe the natural world, nor is it of practical use to the engineer or scientist. It is about “beauty.” In that sense—and in its exploration of the ungraspable concept of infinity—it is analogous to the work done by theologians, which also should be valued for its beauty. Like the God who reveals himself yet remains hidden, pure mathematics cannot deliver any final answers. “One of the most striking features of some of the best of pure mathematics—one thing which makes it beautiful—is the way in which it confronts us with that which exceeds our control, the way it opens up to us things which are beyond our ability to comprehend,” Kilby writes. Pure mathematics enables practitioners to describe with greater and greater clarity and beauty what is finally incalculable and unknowable about the nature of numbers and thus reality. I’ll take her word for it. A search for greater clarity, guided by humility and a sense of awe, is also how Kilby understands theology. It is a compelling vision, one that does not surrender either to an apophatic reticence or to a complacent orthodoxy.