By The Editors
From the Archives
Editorial
George W. Bush 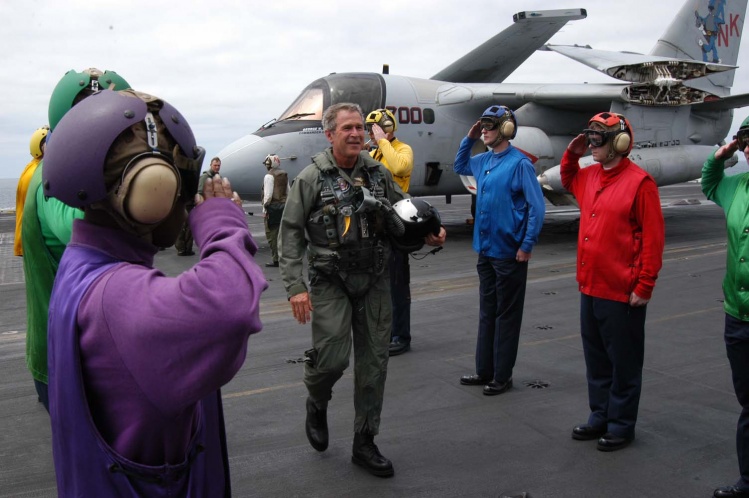 [This editorial was published in our March 28, 2003 issue of Commonweal]

On March 17, President George W. Bush, having failed to secure backing from the UN for the use of force against Iraq, issued his final ultimatum to Saddam Hussein. The dictator and his sons were given forty-eight hours to leave Iraq. Hussein refused. By the time readers receive this issue of Commonweal, U.S. and British forces almost certainly will have invaded Iraq and presumably will be speeding toward Baghdad. If we and the Iraqi people are lucky, this war will be short and decisive, a homicidal tyrant will be deposed, weapons of mass destruction (WMD) will not be unleashed, civilian and military casualties will be minimal, and an oppressed people will gain a measure of freedom and much-needed humanitarian relief. Once in control of Iraq, the U.S. military will be able to locate and destroy the WMD Hussein allegedly has been hiding. In the short term, in other words, the consequences of the war are likely to be positive. Or so the Bush administration and its military strategists hope. Yet the long-term consequences of this war, like any other war--indeed, like the first Gulf War--are not likely to be so easy to manage.

President Bush's supporters promised, even boasted, that he would bring "moral clarity" to U.S. foreign policy, but even his staunchest advocates would be hard pressed to say there has been much clarity, moral or otherwise, from this president in recent months. The administration's diplomatic ineptitude at the UN has been dumbfounding. Few analysts doubt that the United States will win this war; still fewer think we can win the peace without reconciling with the allies we have spurned.

The erratic nature of U.S. actions, demonstrated again in the administration's last-minute and wholly unconvincing effort to resume the Israeli-Palestinian "peace process," explains a good deal of the administration's ineffectiveness. Repeatedly, Bush threw doubt on his real aims by calling for regime change rather than Iraqi disarmament. Serious questions emerged, and grave suspicions were aroused, when some of the evidence of Iraqi duplicity provided to the UN by the United States proved false. Worse, when given the opportunity to present incontrovertible evidence to the Security Council that Iraq was concealing WMD, the administration failed to cinch the case beyond a reasonable doubt. Diplomatically, that proved disastrous. Secretary of Defense Donald Rumsfeld's loose lips didn't help.

This is an extraordinary record of miscalculation and lost chances, especially in the failure to develop and pursue a version of the British proposal for holding the Iraqis to explicit benchmarks and to a somewhat extended deadline. Increasingly, Bush's "moral clarity" seems little more than a cover for American arrogance and his single-minded policy of preemption. Especially sobering in this regard was the president's March 6 press conference, where Bush rarely was able to answer the questions posed. Instead, he hued closely to a prepared script, one that sought to counter all doubts by evoking the specter of September 11 as the rationale for confronting Iraq. No effort was made to explain how Iraq was linked to those attacks, or to document how Hussein posed an imminent threat.

The same one-note line of argument pervaded the president's address to the nation on March 17 and his ultimatum to Hussein. Bush asserted again that intelligence reports confirmed Iraq's possession of WMD, yet offered no proof. He stressed the link between Iraq and September 11 and the possibility of future terrorism. "The danger is clear," he said. "Using chemical, biological or, one day, nuclear weapons, obtained with the help of Iraq, the terrorists could fulfill their stated ambitions and kill thousands or hundreds of thousands of innocent people in our country or any other." In this speculative context, the president restated his doctrine of preemptive action: "The United States of America has the sovereign authority to use force in assuring its own national survival," he said. "We choose to meet the threat now where it arises before it can appear suddenly in our skies and cities." He even went so far as to suggest that not disarming Hussein would be the equivalent of committing "suicide."

Few doubt the real threat posed by Saddam Hussein or the need to confront him. Many doubt that a potential future threat is a justification for war now. As J. Bryan Hehir notes ("An Unnecessary War," page 7), Bush's dubious doctrine of preemption is no basis for the sort of international cooperation the war on terrorism requires. Rather, the logic of Bush's argument is a justification for unilateral U.S. military action and a recipe for international insecurity. Indeed, knowledgeable observers believe that the battle for Baghdad is the first step toward Tehran.

Bush has spoken only in the broadest generalities about what will happen in Iraq after a military victory. Yet wars, even brief ones, have many unintended consequences, as demonstrated by the ongoing turmoil in Afghanistan, Bosnia, and Kosovo. If, as many people think, Iraq is the first stage in an aggressive plan to transform the politics of the Middle East, then U.S. troops will be in Iraq for a decade or more. For a conservative president skeptical of big government to imagine that military conquest and (even benevolent) imperial rule can change the hearts and minds of millions already antagonistic to the United States is a novel combination of hypocrisy and hubris.

At his March 6 news conference, Bush spoke candidly of his prayer life and how his faith sustains him. He has in the past drawn stark lines between "evildoers" and a United States uniquely blessed by God. His speeches are sprinkled with talk about how this nation was called to bring "God's gift of liberty'" to "every human being in the world,” and how "behind all of life and all history there is a dedication and purpose, set by the hand of a just and faithful God."

And so there is. Yet sorting out good from evil, especially in relations among nations, is not an enviable task for a man with Bush's Manichean instincts. Moral clarity is a worthwhile goal; moral simplicity is a dangerous illusion. This president, it seems safe to say, underestimates the real complexity of the world, and of the task placed before him on September 11. "Every sensitive Christian must feel a sense of unworthiness when he is compelled by historic destiny to act as an instrument of God's justice," Reinhold Niebuhr wrote. "Recognition of the common guilt that makes him and his enemy kin must persuade him to imitate the mercy of God, even while he seeks to fulfill the demands of justice."

The threat of terrorism is real; its defeat, one fervidly hopes, will be part of God's justice. Meanwhile, George W. Bush's faith and his illusions will be sorely tested in the months ahead. At this moment, he and all those affected by this war deserve not only our prayers but whatever moral clarity we can offer.