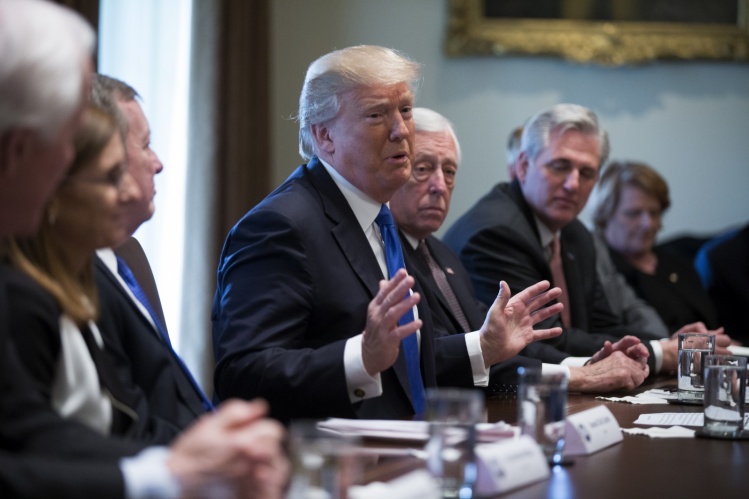 If you are appalled by the chaos, division and meanness of the Trump presidency, if you are tired of the lies he and his apparatchiks tell, take heart. Most of your fellow Americans feel the same way.

There is a condescending habit in the nation’s capital of seeing voters as detached and indifferent to the day-to-day workings of government.

The folks who promised to drain the swamp are guilty of a particularly pernicious form of this elitism. President Trump’s defenders regularly claim that his base is so blindly loyal that nothing he says or does will ever drive its members away.

But news from across the country should shatter these illusions. A large majority of voters, including many erstwhile Trump supporters, are rebelling. The evidence is overwhelming that Trump’s foes are as determined and motivated as any opposition in recent memory.

This message was already delivered in elections in November and December. The latest tidings are from Wisconsin, which led the way toward the style of politics that Trump exploited to get to the White House, even though he fared poorly there in the 2016 primaries.

In the rural 10th Senate District in the state’s western reaches, Democrat Patty Schachtner defeated Republican Assemblyman Adam Jarchow by an impressive 9 percentage points in a special election on Tuesday. Consider that Trump carried the district by 17 points in the presidential election (up from a 6-point margin for Mitt Romney in 2012) and that the seat had been Republican for 17 years.

It was, as my Washington Post colleague Dave Weigel noted, the Democrats’ 34th legislative pickup from the Republicans since Trump’s election. Republicans have flipped just four.

And lest anyone dismiss the importance of what happened, Wisconsin Republican Gov. Scott Walker, who rode to power on the 2010 conservative wave, warned that Schachtner’s victory was “a wake up call for Republicans in Wisconsin.”

Wisconsin matters, and not simply because it was, along with Michigan and Pennsylvania, one of the closely run states that gave Trump his Electoral College victory. It is also the place where American progressivism took root at the turn of the last century, but where conservatives have staged a dramatic realignment of popular sentiments over a short period.

Democrats won it in every presidential election from 1988 to 2012. Hillary Clinton’s strategists made the mistake of taking the state for granted in 2016. What they missed were trends brilliantly analyzed by Katherine J. Cramer, a political scientist at the University of Wisconsin, in her prophetic book, The Politics of Resentment: Rural Consciousness in Wisconsin and the Rise of Scott Walker. It was published eight months before the 2016 vote.

Backlash politics provokes a backlash of its own
sharetweet

As the title suggests, the conservative resurgence Walker engineered was built on a backlash in the countryside against Milwaukee and Madison. Trump profited from the same rural and small-town discontent—and not just in Wisconsin.

“We are in a time of increasing economic inequality and of stark policy bias in favor of the affluent,” Cramer wrote, “and yet the politics of resentment draws our attention to our animosity toward each other rather than the ways in which the political system is not working for anyone but the very few.”

But backlash politics provokes a backlash of its own, and in an interview on Wednesday, Cramer said the voters are weary of division. “Wisconsinites believe in ‘Wisconsin Nice,’” she said, “and they really dislike ‘us versus them’ politics.”

This is certainly Schachtner’s view. The chief medical examiner for St. Croix County—Trump prevailed there by 18 points—told The Associated Press that her victory “could be” a portent of Democratic gains, and added: “My message has always been be kind, be considerate, and we need to help people when they’re down.”

Now this would be a change of pace.

With Washington engulfed in controversy over Trump’s hate-filled comments about people from certain countries, Republicans would do well to note the costs of unkind politics.

A Quinnipiac poll released on Wednesday made clear where the passion in politics lies right now. The survey found Trump with a dismal 38 percent approval rating. More significantly, only 29 percent strongly approved of his performance, while 49 percent strongly disapproved. Intensity of feeling is important to voter turnout, especially in midterms.

Predicting this November’s elections in January is, of course, a fool’s game. But failing to see the depth of the loathing for Trump is a form of political malpractice. He has given nice a chance to prevail.