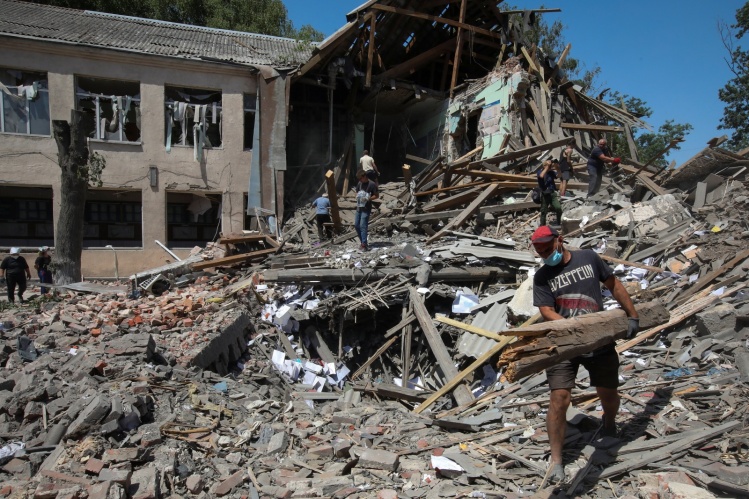 The laws of war are part of the international rule of law and are found in many international treaties, conventions, and compacts. One of the most fundamental of those laws is Article 2(4) of the Charter of the United Nations, which provides that “all members shall refrain in their international relations from the threat or use of force against the territorial integrity or political independence of any State, or in any other manner inconsistent with the Purposes of the United Nations.” The only exception is Article 51, which provides that “Nothing in the present Charter shall impair the inherent right of individual or collective self-defense if an armed attack occurs against a member of the United Nations, until the Security Council has taken measures necessary to maintain international peace and security.”

Article 2(4) is the modern version of the concept of state sovereignty that originated in the 1648 Peace of Westphalia ending the Thirty Years War. Prior to that time, only rulers, princes, or clerics went to war; states as we know them did not exist, at least in the Western Hemisphere. Article 2(4) makes it clear that one sovereign state may not invade another sovereign state unless it is done in self-defense.

War crimes are violations of those parts of the laws of war that have been “criminalized” and are acts that international law deems universally criminal. In the words of Kevin J. Heller of the Australian National University, they are crimes that “every state in the world has independently decided to criminalize.”

There seems to be no doubt that Russia has clearly violated Article 2(4). There was no “armed attack” by Ukraine, and Russia was not otherwise acting in self-defense. Vladimir Putin’s claims that Ukraine’s application to join NATO represented a threat to Russia’s “very existence” and to its “state sovereignty” are preposterous. Not only is Russia’s invasion a clear violation of Article 2(4), but it is also a clear violation of the traditional law of war concept of jus ad bellum, which governs and limits the circumstances under which a war (or here an invasion of another sovereign state) may be undertaken.

Nor is there any doubt that Russia’s conduct in Ukraine violates the companion principle of jus in bello, which regulates the conduct of belligerents already at war. This concept probably came from the writings of St. Thomas Aquinas, who modified St. Augustine’s “just war” theory. The modern articulation of the concept comes largely—but not entirely—from the four Geneva Conventions of 1949 and their three subsequent Protocols.

Although the concepts of jus ad bellum and jus in bello have been around for centuries, the phrase “war crimes” is a relatively recent addition to our lexicon; it did not appear in print until 1872 and then only in passing. The Nuremberg trials were the first in the modern era to try individuals for war crimes. Because the UN Charter was not yet in place, an ad hoc tribunal was created and given the power to try individuals for crimes against peace, war crimes, and “crimes against humanity.”

The decision to charge the Nazi defendants with committing “crimes against humanity” was controversial. Hersch Lauterpacht, the distinguished professor who advised the British delegation in Nuremberg—and who lived in what is now Lviv in Ukraine—argued that the Nazis had committed “crimes against humanity,” a term that he invented; the term was not a part of the laws of war. His counterpart, Raphael Lemkin, who was trying without much success to become an advisor to the American lawyers and who studied at the same university as Lauterpacht in Lviv, argued that a new crime should be charged, a crime that he called “genocide” because it better described the Nazis’ plan to exterminate an entire race or group of people. Lauterpacht won the debate, primarily because Lemkin’s “genocide” required proof of intent, whereas Lauterpacht’s “crime against humanity” did not.  Perhaps for that reason, the word “genocide” does not appear in the Tribunal’s final judgment. Somewhat surprisingly, two years later, the UN General Assembly adopted the Convention on the Prevention and Punishment of the Crime of Genocide.

Following the convictions in Nuremberg, a conference of diplomats met in Geneva at the urging of the International Red Cross for the purpose of updating the 1864 Geneva Convention that required signatories to ensure that their armed forces complied with the laws of war. The four new Conventions, all signed on August 12, 1949, and the three Protocols signed later, together with the new Genocide Convention, became the backbone of international human rights law.

The three Protocols provide additional protection to victims in international and internal armed conflicts. For example, the International Red Cross and other similar organizations must be permitted to provide assistance. Additionally, the use of weapons that cause “superfluous injury and unnecessary suffering” is prohibited, as are “indiscriminate attacks” on civilian populations and the destruction of food, water, and other materials needed for survival. The Protocols also prohibit the recruitment for military purposes of children under the age of fifteen.

Violations of the four Geneva Conventions and their three Protocols as well as the Genocide Convention would be at the heart of any allegation that Russian generals and other individuals have committed war crimes. We have seen photographs of civilian apartment buildings and schools bombed by Russian artillery and missiles. Doing so is a clear violation of the Fourth Geneva Convention, the First Protocol, and perhaps also Common Article 3, if the conflict is deemed to be “not of an international character.” For example, the First Protocol explicitly provides that “the civilian population and individual civilians shall enjoy general protection against dangers arising from military operations.... The civilian population as such, as well as individual civilians, shall not be the object of attack...[and] indiscriminate attacks are prohibited.” It also provides that “in the conduct of military operations, constant care shall be taken to spare the civilian population, civilians, and civilian objects.”

Similarly, we have read about the torture and perhaps even the killing of Ukrainian prisoners of war. If true, that would be a violation of the Third Geneva Convention. It would also violate the First Protocol, which requires that all persons whose liberty has been restricted, whether they are interned or detained, “shall be treated humanely.” Torture is a well-recognized violation of customary international human rights, and it is also a war crime under the Rome Statute creating the International Criminal Court.

It is possible that Russia’s deliberate killing or wounding of Ukrainians solely because they are Ukrainians constitutes the war crime of genocide.
sharetweet

We have also learned about the capture of at least three Americans who were formerly with the U.S. Army or Marine Corps and who were helping the Ukrainians resist the Russians. As “inhabitants of a non-occupied territory who, on the approach of the enemy, spontaneously take up weapons to resist the invading forces,” they may be entitled to the protections of the First Geneva Convention. Whether or not their capture has resulted in torture and, if so, whether it constitutes a violation of the Third Geneva Convention, depends in part on whether they were part of a “volunteer corps” that was commanded by “a person responsible for his subordinates” or were accompanying Ukrainian armed forces with authorization and had been provided with an “identity card.” Whether or not they can claim rights under the Third Convention, they are nevertheless entitled to be “treated humanely” under the First Protocol. As noted, torture is a war crime under the Rome Statute in all circumstances.

The Ukrainian government has alleged that the Russians stole 500,000 tons of grain, Ukraine’s principal agricultural product, and is trying to sell the grain in Africa. This appears to be a violation of the First Protocol, which prohibits attacking, destroying, removing, or rendering useless objects indispensable to the survival of the civilian population, “such as foodstuffs, agricultural areas for the production of foodstuffs, crops...for the specific purpose of denying them for their sustenance value to the civilian population or to the adverse Party, whatever the motive.”

It is possible that Russia’s deliberate killing or wounding of Ukrainians solely because they are Ukrainians constitutes the war crime of genocide. The Genocide Convention, adopted by both Russia and Ukraine when they were part of the USSR, prohibits killing or causing serious bodily harm “committed with intent to destroy, in whole or in part, a national, ethnical, racial or religious group, as such.” The International Criminal Court (ICC) has criminal jurisdiction over individuals who are alleged to have committed war crimes.

War crimes may be prosecuted by states (for example, under the U.S. federal criminal code, war crimes are punishable by life imprisonment or death), the International Court of Justice (ICJ), the ICC, and ad hoc tribunals such as the International Criminal Tribunal for the Former Yugoslavia.

The ICJ, which was created as the principal judicial organ of the UN, was given explicit authority by Article IX of the Genocide Convention to resolve disputes “relating to the interpretation, application or fulfillment” of the Convention. In its application to the ICJ, Ukraine argued that there was a dispute as to whether Russia’s conduct amounts to genocide. The court agreed and as a “provisional matter” ordered Russia to “immediately suspend the military operations that it commenced on 24 February 2022 in the territory of Ukraine.” Under Article 94 of the UN Charter, all member states must comply with decisions of the ICJ, but in this case, not only did Russia not attend the court proceedings, but it also completely ignored the ICJ’s March 16, 2022, order. Unfortunately, the court’s only recourse in the face of recalcitrance is to report the matter to the UN Security Council, where Russia can exercise a veto.

If there is any “war crime” that best describes the Russian invasion of Ukraine, it is probably the crime of aggression. The Nuremberg Tribunal called aggression “the supreme international crime.” Pursuant to an amendment to the Rome Treaty resulting from a conference in Kampala, Uganda, in 2010, the ICC now has explicit jurisdiction to hear charges of the crime of aggression.

Unfortunately, the definition of aggression adopted at that conference is narrow and covers only political or military leaders in a position effectively to control the political or military acts of a state. To complicate matters even more, in 2017, the United Kingdom and France sponsored a resolution in the Assembly of State Parties that provided that the ICC could only exercise jurisdiction over the crime of aggression if it is committed by the nationals or in the territories of the forty-three states that have ratified the aggression amendment to the Rome Statute. This too is unfortunate, since neither Russia nor Ukraine has ratified the aggression amendment. Thus, even if Vladimir Putin and his generals could be arrested and transported to the Hague for a trial, they could not be charged with the crime of aggression. To no one’s surprise, there have been no ICC cases in which the crime of aggression has been alleged.

Instead of pursuing the crime of aggression, the ICC has opened an investigation into other possible war crimes committed by Russian individuals in connection with the Russian invasion of Ukraine, beginning with the Russia’s invasion of Crimea in 2014. But the ICC does not try defendants in absentia; the defendant must be physically present in the Hague. As long as Vladimir Putin remains in Russia, his arrest by the ICC is highly unlikely.