Can the Country’s Tribal Differences Be Bridged?
By Kevin B. Sullivan
Domestic Affairs
Donald Trump 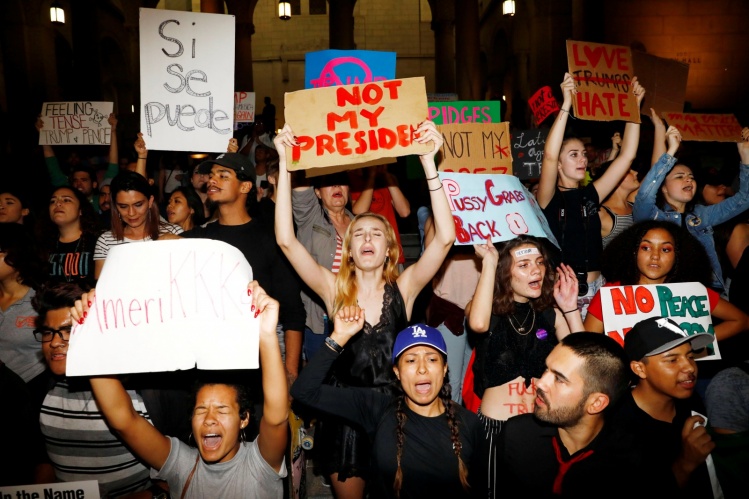 It’s hard when viewing the remnants of the steel industry in Bethlehem, Pennsylvania, not to be astounded by what once was. At its height, the eponymously named Bethlehem Steel Corporation was the second-largest producer of steel in the United States and the nation’s largest ship builder. From furnaces filled with ore, coke, and limestone came the materials for our bridges and battleships, our tallest skyscrapers and largest factories.

Bethlehem Steel thus also helped fuel the American capitalist superpower. But just important as the wealth the mills produced were the communities that such industry nurtured. The workers who came to this town, and many other towns like it, built homes, schools, and churches, finding in the process a path toward stable and fulfilling lives. Today just a few of the old blast furnaces that once served as a kind of skyline for Bethlehem remain standing, converted in 2011 into a casino and performing-arts center. And like much of the old rust belt, Bethlehem struggles to replicate the culture and economy that steel once provided. Gutted of their industry and raison d’etre, these once tight-knit towns have withered and declined, their shrinking populations underemployed and anxious, if not despairing, about their prospects.

How and where we live influences the political climate, with the way we sort ourselves shaping an oppositional topography—what urban policy hands refer to as spatial polarization. That polarization has of course taken on, nationwide, an unmistakably partisan quality, with a calcifying effect on U.S. politics: red states are pitted against blue ones, cities against suburbs and rural regions, the people of working-class towns against those gathered in media and financial centers. Is there a way to make sense of the changing nature of our union?

Yale Law professor Amy Chua takes up this question in her new book, Political Tribes: Group Instinct and the Fate of Nations. In a brisk examination of the rise of political tribalism and the increase in ethno-nationalist sentiment across the United States, she sees danger to the cohesive origin myth developed more than two centuries ago by our founders. Rather than coming together as a more perfect union, the United States is, in Chua’s opinion, fracturing along lines of geography, ethnicity, religion, and class. What such divisions portend is not just a map mottled with red and blue states, but also a more atomized collection of different and insular peoples. While the fissures are unlikely to lead to the kind of dissolution that threatens the European Union and the United Kingdom, or the kind of violent state collapse seen in the Middle East and the Balkans, what is at risk, Chua argues, is a collective sense of identity. “Today, no group in America feels comfortably dominant,” she writes. “Every group feels attacked, pitted against other groups not just for jobs and spoils but for the right to define the nation’s identity. In these conditions, democracy devolves into zero-sum group competition.”

The current historic rearranging of the country’s ethnic and cultural composition is likely to compound these disputes, Chua adds. Some analysts project that the United States will cease to be a majority-white nation by mid-century. Increasingly, as the baby-boom generation continues to age and pass on, everything from the languages we speak to the food and entertainment we consume will only continue to diversify and, consequently, spur regional and ideological divisions. Often these disagreements manifest themselves in relatively benign debates over issues like cultural appropriation and white privilege, and sometimes in more alarming forms, such as the resurgence of violent white supremacist groups.

To find true national reconciliation, we must search deeper than the ballot box.
sharetweet

Chua pins much of the blame for this societal split on the country’s coastal elites, who too often view red-state America—and Trump supporters in particular—with condescension and scorn. As for solutions, she offers the familiar ones: communication, understanding, and reconciliation: “we need to collectively find a national identity capacious enough to resonate with…Americans of all sorts—old and young, immigrant and native born, urban and rural, descendants of slaves as well as descendants of slave owners.”

The pursuit of that unifying purpose may be a daunting one under current circumstances. Disagreements over Donald Trump’s presidency often speak to broader, more entrenched differences among Americans, as indicated in a recent Pew Research Center survey of his supporters and detractors. More than half of those in each group said that their political rivals fail to hold the same “values and goals” as they do. The country’s common ground appears to be eroding, as Americans by and large hunker down in disparate camps. Recently in Commonweal, Frank Pasquale wrote that it’s up to progressives to try to reunite the tribes. They “need to reach out to the apathetic, with their own deep story of solidarity, equality, and effective government. American politics is now a race to enroll the unengaged in one of two incompatible visions of the American dream. The sooner anti-Trump forces realize this, the better.”

Yet that seems to reflect the familiar chimerical maxim of the American left—that the decisive wave is as close as the next election, and that the proper tinkering and tidying up of the electoral system will ensure continued progress. True, feckless gerrymandering has decreased competition in U.S. politics and increased polarization, but so too have the hardened attitudes of the American public. Today the legislative branch functions largely as a parliamentarian body beholden to party and geography.

And at any rate, the real problem may rest outside the electoral cycles and the political debates found on our Facebook feeds and cable television. Far more worrisome is that many Americans might just not care what happens. In his recent New York magazine essay on the ongoing opioid crisis, Andrew Sullivan links the rise of drug-related escapism in the United States to a much deeper national malady: the American struggle to make sense of a world made foreign by unfettered capitalism, globalization, and social dislocation. “Ever-more-powerful market forces actually undermine the foundations of social stability, wreaking havoc on tradition, religion, and robust civil associations,” Sullivan says. “They create a less human world. They make us less happy. They generate pain.”

Remember that in 2016 alone, drug overdoses claimed more than 60,000 American lives. That’s more than the total number of American combat deaths in the Vietnam War. Aside from those not looking to escape the malaise of modern American life entirely, there are still those who rely on pharmaceuticals every day simply to cope with it. According to the Centers for Disease Control, antidepressant use in the United States spiked 65 percent between 1999 and 2014. Even when diagnosed and addressed with better treatment, depression can affect political participation, according to Christopher Ojeda, assistant professor of political science at the University of Tennessee-Knoxville. “Mobilization is a big part of the political process, and depression may push people out of social groups and keep people from the electoral process,” he says.

In other words, elections alone cannot fix America’s tribal differences or ease its societal ache, and Chua’s calls for continued discussion and understanding ultimately fall short. To find true national reconciliation, we must search deeper than the ballot box.

The histories of places like Bethlehem might offer a solution. Though the churches and union halls largely disappeared with the factories, in their day they provided people with a place to gather, giving them a sense of belonging. These places—what sociologist Ray Oldenburg calls “third spaces,” informal settings distinct from the home and workplace—played a formative and leveling role in American communities, instilling a combined sense of purpose that helped nourish such towns through the 20th century. In the mid-1950s, approximately one-third of all U.S. workers were members of a union. These organized laborers built the American middle class and helped grow the United States into the richest country in the world. The essence of their efforts deserves a reappraisal. Other models found across much of Northern Europe—such as the Ghent system and sectoral collective bargaining—could also offer guidance.

Globalization and rapid advancements in technology have profoundly altered the American way of life, and driven us deeper into partisan enclaves and ennui-inducing social media platforms. Perhaps a reinvigorated labor movement could sooth some of our nation’s tribal wounds, and help restore across the country a sense of communion lost in the thrust of modernity and progress.