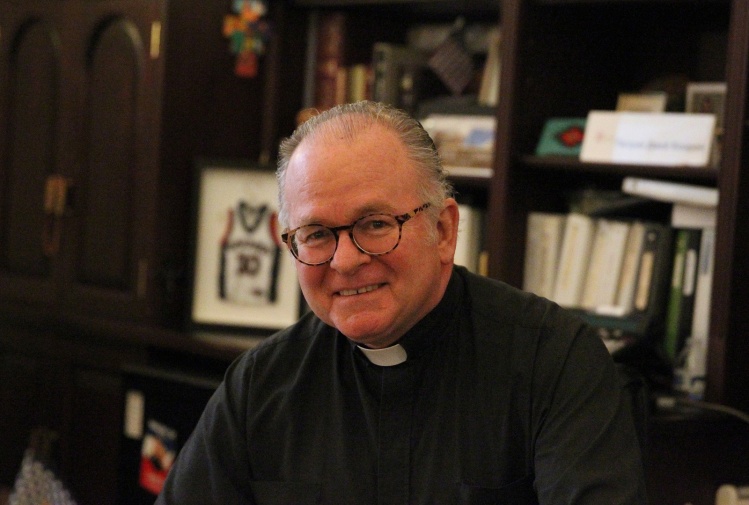 Jesuit Father Patrick J. Conroy had been the chaplain of the U.S. House of Representatives since 2011. (CNS photo/Rhina Guidos)

I’ve probably written too much over the years dissecting Paul Ryan’s tortured relationship with Catholic social teaching. It’s hard not to be intrigued and also perplexed by a powerful Catholic in public life who traded letters about the federal budget with Cardinal Timothy Dolan, dropped references to Aquinas, and strangely thought he could square the cruel philosophy of Ayn Rand with a communitarian Catholic tradition that puts the common good at the center of political deliberations. While religion writers have long followed Ryan’s misadventures in theological politics, the mainstream media was abuzz last week about a different kind of Catholic controversy that casts the House Speaker in an unflattering light.

After House Chaplain Fr. Patrick Conroy offered his resignation at the request of Ryan, the Jesuit priest told the media that Ryan had confronted him about a prayer he gave on the House floor as the chamber debated a tax-reform package. “Padre, you just got to stay out of politics,” the priest reported Ryan telling him. Ryan denies firing the priest for political reasons. He told the House Republican Conference that Fr. Conroy was let go because a number of members felt their “pastoral needs” were not being met. It’s an unsatisfying answer that leaves more questions than answers. As for that particular prayer, here is what the priest said:

May all members be mindful that the institutions and structures of our great nation guarantee the opportunities that have allowed some to achieve great success, while others continue to struggle. May their efforts these days guarantee that there are not winners and losers under new tax laws, but benefits balanced and shared by all Americans.

The reflection was hardly a socialist screed with a dash of spirituality added for good measure. It was a basic call to remember the common good. But House Republicans were, in fact, preparing a tax package that would create a few big winners and many losers by handing out a massive tax break to the wealthiest Americans at the expense of almost everyone else. It’s not hard to understand why Conroy’s words might rankle faithful disciples of supply-side economics. Let’s not forget that Ryan once took issue with another Jesuit priest, Pope Francis. “The guy is from Argentina,” Ryan scoffed a few years ago. “They haven’t had real capitalism in Argentina. They have crony capitalism in Argentina. They don't have a true free enterprise system.”

Fr. Conroy clearly didn’t deliver a partisan prayer. But was his prayer political? In the best sense of the word, yes.

In traditional Catholic teaching, politics isn’t a dirty world. Politics is what happens in the public space when citizens deliberate over rights and responsibilities, put flesh on the bones of our ideals, and seek compromises amid the healthy complexity of a pluralistic society. The fact that politics can be ugly, driven by self-interest, and marked by corruption does not mean a faithful citizen should simply retreat. “A good Catholic meddles in politics,” as Pope Francis cheekily described the Catholic obligation to participate in the civic arena. That includes Catholic clergy and religious institutions as well as lay people. “Some question whether it is appropriate for the Church to play a role in political life,” the U.S. bishops write in Faithful Citizenship, a document released every four years as a reflection for Catholic voters. “However, the obligation to teach the moral truths that should shape our lives, including our public lives, is central to the mission given to the Church by Jesus Christ…. Civil law should fully recognize and protect the right of the Church and other institutions in civil society to participate in cultural, political, and economic life without being forced to abandon or ignore their central moral convictions.”

Prayer should not be partisan. But it can be political. In the “Our Father,” Christians pray for God’s kingdom to come “on earth.” Building God’s kingdom is not abstract. This requires, as the Second Vatican Council described it, reading the “signs of the times” and responding to injustice. That’s not just a Catholic position. “To clasp the hands in prayer,” the Protestant theologian Karl Barth observed, “is the beginning of an uprising against the disorder of the world.” The black liberation theologian James Cone, who passed away last week, challenged the conscience of the church, especially white Christians, by rightly insisting the Gospel demands a confrontation with structures and systems that demean and destroy black lives. He stood in a long tradition of men and women, saints and activists, who drew close to God in prayer, but who knew those prayers rang hollow if words were not followed by action.

Paul Ryan often tried to find justification in Catholic teaching for policies that helped the rich at the expense of the poor. Now he leaves Congress lecturing a Catholic priest about how to pray. It’s a sad but fitting coda to his congressional career. But at a deeper level, this story isn't simply about Ryan. Today’s Republican Party is increasingly untethered from any kind of consistent moral framework. The GOP bangs the drum about religious liberty while happily supporting a president who slams the door shut on immigrants and refugees from predominantly Muslim countries. Rep. Mark Walker of North Carolina, a Southern Baptist minister, said he wants the next chaplain to be a married man with children, which would create a de facto rule against Catholic clergy serving in the position—a sentiment that harkens back to the anti-Catholic bigotry of the past century.

The position of congressional chaplain dates back to 1774, when Jacob Duche, the rector of Christ Episcopal Church in Philadelphia, was recruited to offer prayers before the First Continental Congress. The U.S. Senate selected an Episcopal bishop from New York as its chaplain in 1789 after the ratification of the Constitution. The House of Representatives chose a Presbyterian minister as its first chaplain the same year. Fr. Conroy, appointed by John Boehner, the former Republican House Speaker, was only the second Catholic priest to hold the job. Some have argued for doing away with the tradition. I see value in having a spiritual support system for lawmakers who work long hours in a demanding job that often keeps them away from family. But much like a Republican Party that doesn't reflect the diversity of the country, the position needs to be updated. As Wendy Cadge, a professor at Brandeis University, and Laura Olson, a Clemson University professor, explained in a Religion News Service article, every congressional chaplain since 1789 has been a Christian man. Nearly all have been Protestant. Only one, the current Senate chaplain, has been a person of color.

If conservatives of conscience in the GOP want to reach beyond their base of white evangelicals who have traded the Gospel of Jesus Christ for Trump's plutocratic populism, they might start by not insisting on a House chaplain that merely flatters them.